National Signing Day in St. Charles Parish saw a celebration of two of its most prolific football stars as they prepare to move on to the collegiate level. For one, the destination has been known for months. For the other, there was a shift in course.

Hahnville defensive tackle Adonis Friloux officially signed with Tulane on Wednesday morning, while Destrehan running back Kyle Edwards is off to Alabama. Edwards committed to play for the Crimson Tide during the prep football season and has stayed the course en route to play for head coach Nick Saban.

But for Friloux, his signing made official a change of heart he indicated last week, when he announced he was de-committing from the University of Houston and was freshly committed to play for head coach Willie Fritz at Tulane.

Friloux said he hadn’t taken an official visit to Tulane, but nonetheless the school, team and staff made him feel it was the place to be. 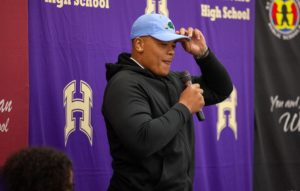 “My biggest thing is family. I love my family, and they welcomed me like family,” Friloux said. “When they opened themselves up to me, I really appreciated that … it’s family over there.”

Friloux, who tallied 21 sacks and 25 tackles for loss as an interior pass rusher in his senior year, said a big selling point was the chance to compete for playing time early, with potentially a chance to start.

“He told me ‘you’ll be fighting for a starting position. I believe in your abilities, your technique,’” Friloux said. “You could play as a freshman. That was a very big thing. My dream is to play college football, so the chance to play as a freshman is a big deal.”

Hahnville head coach Nick Saltaformaggio said he thinks Friloux will ultimately not only excel as a top player for the Green Wave, but beyond.

“I think before it’s all said and done he’s going to be a tremendous player, a great player, in that conference,” Saltaformaggio said. “The way he works, the foundation he has … he’s going to be a dominant player. And if he stays healthy, with his productivity, he’ll have a chance to play for money one day.”

Saltaformaggio recounted a moment at Hahnville he believes made Friloux more confident in his decision to shift course.

“Houston and Tulane were there at the same time, and his dad is walking with him and said ‘It’s a whole lot easier to cross the Mississippi River to see you play than to cross the state line. I think that gave him some affirmation,” Saltaformaggio said. 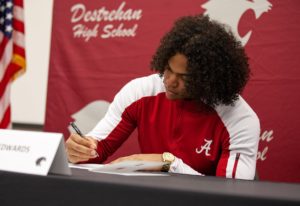 Edwards, who rushed for 1,851 yards and accounted for 29 touchdowns as a senior, officially signed his letter of intent in December. He said Alabama represents a chance to achieve greatness.

“I’m ready to work as soon as I get there. It’s a huge opportunity to become great,” Edwards said. “How they train their players, I know they can take my talents and make me 10 times better. I’m crazy excited about it.”

The opportunity to play for a legendary coach like Nick Saban is nothing Edwards takes lightly.

“Just hearing Nick Saban say ‘We love your leadership, we love your effort and we’d love to have you here at Alabama,’ you can’t help but feel like ‘wow,’” Edwards said. “One time that I went out there, he said ‘I’d be happy to have you dress out now.’ That gave me a great feeling to hear.”

When making comments to the crowd assembled at the signing day ceremony at Luling’s Professional Learning Center, Robicheaux noted he doesn’t often opt to speak at length about individual players, because “it’s all about team.”

Robicheaux recounted the late season decision the Wildcats made to abandon their Air Raid spread offense in favor of a bigger, run-heavy attack that would feature Edwards early and often.

“When we were 4-3, a lot of guys would have said ‘I’m just gonna play this out.’ Not Kyle Edwards,” Robicheaux said. “Kyle Edwards said, ‘put it on me.’ We lined up in two tight end I (formation), like Destrehan’s never done in their life, and we let Kyle do it. And I’ll tell you what … it was one of the greatest efforts I’ve seen in a long time.”

Robicheaux spoke even higher of Edwards as a person.

“Our offensive line loves to block for him. Our receivers love to block for him,” Robicheaux said. “He understands the importance of chemistry. He’s truly a genuine kid … who really believes in the word team. I can’t be prouder of an individual. This is the reason why we do this.”

The lives of Maria Strickland and her 5-year-old daughter Morghan changed drastically in February, the two taking a turn down an uncommon and at times scary path due to a condition that mystifies even the experts. […]