When St. Charles Catholic put the finishing touches on its second consecutive state football championship this month, it was the latest chapter in the story of a program that’s evolved into one of Louisiana’s powerhouses.

Wayne Stein has led the Comets to two football and two baseball state crowns over the past two calendar years as the head coach of both programs, an incredible feat that will be tough for anyone to replicate for quite some time.

In the 1990s, it would have been very difficult to imagine SCC ascending to these heights. But for more than two decades, Frank Monica built a legacy as the school’s athletic director and head football coach – he was the winningest head coach in the history of the River Parishes, helped mold countless boys into men, and by his final season in 2020 at the age of 72 had laid the foundation for the Comets to continue on under his protégé Stein as one of the state’s most respected programs.

Recently, the school made sure that legacy will be long remembered. SCC brought members of the Comet family from throughout the program’s history together to celebrate the dedication of Thomas Dupuy Stadium’s Frank Monica Field. 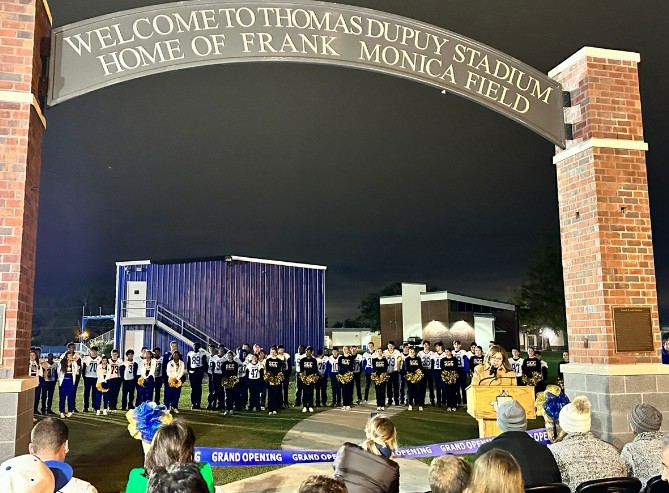 The new football stadium bears the name of Monica and Thomas Dupuy – the latter’s name has adorned the Comets field for many years, and SCC’s home field now honors two Comet legends. A new archway now welcomes visitors to Thomas J. Dupuy Stadium, home of Frank Monica Field, as they make their entrance.

“I’m honored and humbled by it, and probably not deserving of it,” Monica said of the Comets’ home field being named in his honor. “All I did was do my job. I did my job as hard as I possibly could and gave it everything I had. I wanted my kids to win games but more than that I wanted them to take something with them forever, not just from game time of from football season. I wanted to make them accountable. I wanted to give them from structure.”

Monica, who finished his career with 284 victories, guided the 2011 Comets to the first state football championship in school history, an undefeated 15-0 season that saw St. Charles largely dominate its competition before earning hard-fought victories over Parkview Baptist and Amite in the Class 3A semifinals and finals, respectively. It was Monica’s third state championship at the prep level, after leading Lutcher and Riverside to state crowns over the course of his career.

At the time, the Comets win was the pinnacle of a journey that began with Monica’s arrival at the school following his tenure as an assistant coach at Tulane.

The hero of this story is Monica’s wife Nancy, who asked him to make the jump to St. Charles once that job was available.

“She’s the one that told me, ‘I’d appreciate you taking the St. Charles job,’” Monica said. “The college life is tough. Away games, recruiting … she was very encouraging of it. ‘You have the chance to coach your sons, your nephews’ and that it would be easier on her if I did that. And she had a point. She was the one running the car pools, and there’s something to be said about sleeping in your bed every night.”

Once he arrived, step one upon taking the helm of the football team was to get the team’s numbers up. SCC had moved up to Class 3A for the first time ever and only made that cut by eight students in its enrollment.

“Sometimes we had to recruit kids in the hallway, convince them to come on out,” Monica said.

The athletic facilities also needed to be upgraded. Monica credited the support of parents and others around the program for making it happen. The third step was to convince the players they would be successful.

The culture Monica envisioned started to be engrained. To that end, he understood he had to set the example from the top.

“I felt like I had to be the first one to the office and the last one to leave. There’s a saying, ‘The speed of the pack is determined by the pace of the leader.’ I was also blessed with great assistant coaches,” Monica said.

Among those assistants were Stein, his nephew, and his son Ty, each of whom served as his coordinators – Wayne on defense, Ty on offense – and who are piloting the program to this day following Monica’s departure from the sideline.

Between football, baseball and softball, both men along with Monica’s son Nick have all led teams to state crowns as head coaches.

“I’m very, very proud of them, and very flattered when I see them do a lot of the same things we incorporated years ago,” Monica said. “They all have a strong work ethic. It’s not about what you know as much as it’s about your work ethic.”

They also each share one of Monica’s strongest traits, attention to detail, something that extended far beyond x’s and o’s. His program was built on a foundation of accountability and discipline. The Comets never took off their helmets during games or practice – “If I call on you to go into a game, I don’t want you looking for your helmet” – and one of his axioms most quoted back to him by parents and former players is “If you’re 15 minutes early, you’ll never be late.”

“Kids want discipline. They want structure. It’s not about trophies on a wall, but all about relationships and all about that experience you share with one another.”

Monica was quick to note that while the stadium will bear his name, the honor is one shared by the SCC community as a whole.

“It just symbolizes all that’s gone on,” Monica said. “It’s because of all the coaches and players who put so much into it, because of the administration, Quarterbacks Club and the community that pitched in all those years. That field’s been a memorable one and has hosted some big victories. I look back at the things we’ve done … it went a lot deeper than me.”

Deputies with the St. Charles Parish Sheriff’s Office were dispatched to a residence in the 200 block of 4th Street in Luling just after midnight on Jan. 9 after receiving a call from a female requesting medical aid for a male. […]