Once a humble two-star recruit, Justin Jefferson is a shining star at the NFL level, making highlight reel plays seemingly every week – and placing his name amongst some of the best to ever play the game.

As Destrehan attempts to secure its second straight appearance in the Class 5A championship game this week, one of its greatest gridiron alums is establishing one of the best NFL rookie seasons ever. A wide receiver with the Minnesota Vikings, Jefferson recently became the fifth player in NFL history to record 1,000 receiving yards in his first 12 games, joining Randy Moss, Anquan Boldin, Marques Colston and Odell Beckham Jr.

Jefferson was drafted by the Vikings in round one of the NFL Draft earlier this season in what was considered one of the richest drafts in regards to wide receiver talent in several years. He was the fifth rookie receiver selected – and ranks first in receptions, yards and touchdowns.

NFL analyst Mike Detillier has watched Jefferson since his days at Destrehan. He said the rookie has blown away expectations, particularly considering the learning curve for wide receivers in the NFL traditionally. That it comes during a year in which the NFL did not hold preseason games and had a truncated preparation period for the season is icing on the cake.

“Watching Justin is just amazing,” Detillier said. “He is putting up unbelievable numbers in a year of no off-season work, no OTAs or minicamps and zero preseason games. You hear coaches and general managers say, ‘Well, first round receivers take two, maybe three years to mature. It took Justin about three plays.”

Jefferson’s work ethic, Detillier says, is second to none, and it’s added up to one of the finest seasons by a rookie receiver in NFL history.

“Justin is dedicated to be the best,” Detillier said. “A terrific route runner, he has the ability to set up a defender and gain separation downfield. While he may not be what they label a speedster wide receiver, he’s plenty fast enough. He’s averaging 17 yards a catch. He’s such a smart player and he grasped the NFL so quickly. He’s a difference maker on the field.”

Jefferson blossomed as an upperclassman at Destrehan and went on to sign with LSU, where he quickly found a rapport with quarterback – and future No. 1 overall pick – Joe Burrow. He helped guide LSU to a national championship as a junior, when he recorded 111 receptions for 1,540 yards and 18 touchdowns. As a sophomore, he caught 54 passes for 875 yards and six touchdowns. He’s been touted as a potential NFL first round draft pick. 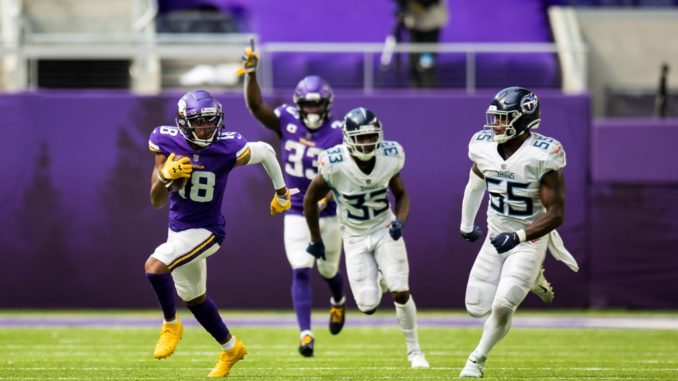 He was the third of his family to play at Destrehan and the third to play at LSU, after siblings Jordan and Rickey.

Through the first 14 games of his NFL career, Jefferson has posted 1,182 yards on 73 receptions and has scored seven touchdowns. Detillier offered a comparison to the Saints’ Michael Thomas, who had a very strong rookie season himself – Thomas caught 92 passes for 1,137 yards and nine touchdowns in his rookie season. Jefferson’s numbers are close, with two games left to play.

“I thought before the season started that Joe Burrow had the best chance to win Offensive Rookie of the Year. He might have won it if not for his knee injury, but Jefferson is the clear cut front runner for that spot today,” Detillier said.

The success both LSU alums have had, Detillier said, offers a reminder as to just how talented LSU’s 2019-20 National Championship team was – the Tigers’ receiving corps shining as brightly as any position group on that team.

“I think about that LSU group last season and we saw Justin, Ja’Marr Chase, Terrace Marshall, Racey McMath, Stephen Sullivan, Jaray Jenkins and Jontre Kirklin and I don’t think we will ever see that talented a group of wide receivers at LSU at one time. That was a special unit,” Detillier said.