Hahnville’s resident sharpshooter will be drilling shots from long range at the collegiate level.

Claudell Harris Jr., the 6’3 guard who led the Tigers’ state semifinalist squad in scoring last season, recently made it official by signing with Charleston Southern during the early signing period.

He inked his letter of intent at a recent “drive through” celebration, as COVID-19 has led to a halt to the usual group seasonal signing ceremonies

“Yeah, man, it feels great … just that chance to sign those papers,” said Harris. “I saw a lot of support, lots of love. There’s not a lot of Division I basketball players coming out of St. Charles Parish, so that’s a big accomplishment and I’m really proud of it.”

Hahnville reached the Class 5A semifinals last season, and the sharpshooting guard noticed his profile growing among recruiters. 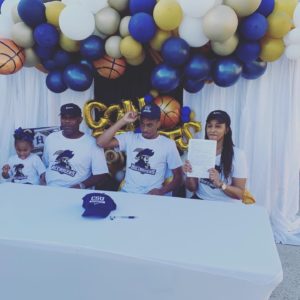 “Around that time, I got calls from five or six Division II schools,” said Harris, nicknamed MJ. “I took time in quarantine to add more elements to my game, scoring at all three levels against defenders who might be bigger and taller than me in AAU. Then I got a lot of calls from Division I schools … mid-majors, low majors. It was the full spectrum.”

He liked the fit at Charleston Southern, a program that pushes the pace, scores points-a-plenty – and heavily recruits outside shooters.

That’s Harris’ forte. He’s a 3-point marksman who drilled a Hahnville record 11 3-point makes against East St. John in a district game last season, and he was lights out all season long, leading the Tigers in scoring with over 16 points per game.

“I feel like I fit well with them,” Harris said. “They run a really fast tempo. And one through five, everybody’s got to be able to shoot the ball. They only recruit shooters, and that’s my specialty. They had three or four players averaging double figures last season, so they score a lot of points.”

The Hahnville senior is going to be a second generation Division I player. His father, Claudell Sr., played for Southeastern in the early 90s.

When Steve and Shana Acosta got into their car in Ponchatoula to drive and meet Mason Dauphin in St. Charles Parish, all they could hope and pray for was the best. […]