Officially. Freddie and Iola St. Pierre saw five grandchildren play baseball for the Destrehan Wildcats. Unofficially, through 25 years of volunteering with the program, they saw so, so many more – the St. Pierres were truly part of the DHS family.

“(The players) were all like their adopted grandkids,” said Destrehan baseball coach Chris Mire.

Synonymous with the program for so long, the St. Pierre’s established a legacy of service at Destrehan and the school ensured that won’t ever be forgotten. Prior to the Wildcats’ afternoon home game against Jesuit, a ceremony was held to dedicate honor the couple, and the concession stand was dedicated in their honor – a plaque and photo commemorating their service now adorns the stand, which Iola, who passed away in 2018 at the age of 83, ran so well for many years.

Freddie attended the ceremony with members of his family, while a number of former players also showed out to honor the couple. Mire, Principal Jason Madere and former Principal and baseball coach Stephen Weber were among those to speak about their contributions and share stories and anecdotes.

“It brought back a whole lot of memories,” Freddie said.

The gesture was originally planned to take place last year before COVID-19 caused the cancellation of the 2020 baseball season midway through the schedule. 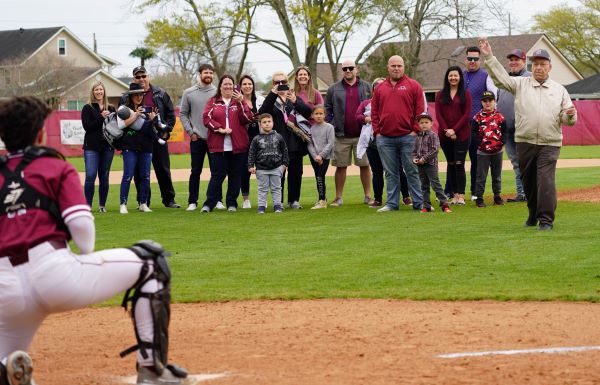 The Destrehan residents volunteered with the baseball program for approximately 25 years, starting when their grandson Jared began playing ball with the Wildcats in 1990.

Iola took care of concessions and Freddie manned the scoreboard and microphone in the press box, announcing during the games.

“I wish I could still do it,” Freddie said with a chuckle. “But I’m 91 now. I know we both enjoyed it so much that we did it every time they had a game.”

Such was Iola’s love of the team that her obituary described the Chackbay native as a “wife, mother, grandmother, great grandmother and lover of Destrehan High School baseball.” The duo had free passes to all Destrehan sporting events provided by the school, and they were fans of all Wildcats sports.

Their connection to the players is what kept them at the ballpark – even during times without a grandchild on the team. The two worked varsity, JV and freshman games alike during prep season.

“The kids … they were such great kids, always,” Iola said in 2018. “They were my favorite part of it all. We were always recognized so nice by the boys. They knew when it was my birthday.”

A Destrehan alum, Mire played for the Wildcats during the St. Pierres’ run with the school.

“I played with their second grandson to play with the team,” Mire said. “They’re a special couple, a special family. I’m really happy to be able to honor them.

“I think when you’re playing, you get used to seeing them at the ballpark, giving them a hug before every game … after you leave, you realize how special it was for them, too. Of course it was special for us to have them. But you realize how dedicated they were to the program and how much of an impact we had on them as well. It’s a good feeling to know we helped fulfill their lives as much as they did for us.”

The tribute, Freddie said, was touching.

“It was beautiful, really nice. They didn’t have to do it,” Freddie said. “I know I really appreciated it.” 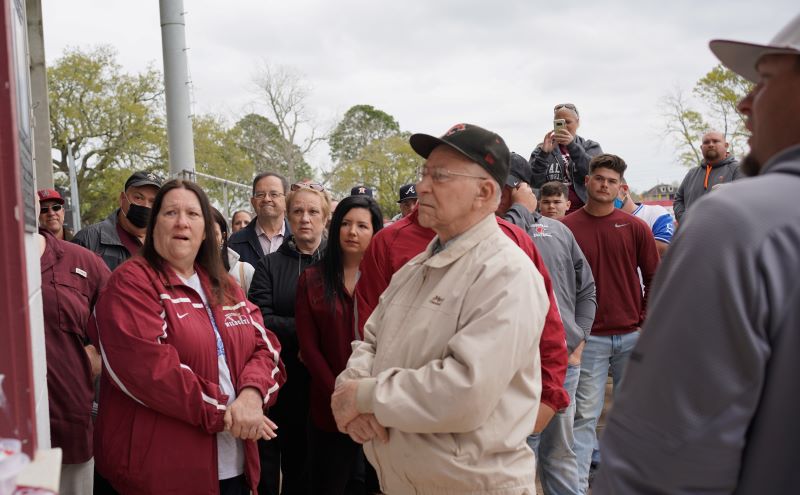 The stories traded on Saturday brought back some warm memories – and some that were quite humorous. Some of the most popular recollections were of Iola, who would put her trademark accent on display when she got worked up, as well as some of Freddie’s more random selections while working the PA system.

“We remembered Iola fussing at us for running out of stuff in the concession stand … and Mr. Freddie randomly playing the national anthem in the fourth inning of a game, and everyone not knowing if they’re supposed to stand up or not,” Mire said. “We shared some stories and had a chuckle on some of those. We could always see (Iola) cheering from that window – and fussing from that window. We always knew she was there.

He called it a “really special day for them and for the program.”

“We just felt like they needed to be with us beyond the time they served here,” Mire said.

Brittany Bonnaffons of Hahnville High School was one of 22 educators from across Louisiana recently selected for the Louisiana Department of Education’s 2022-23 Teacher Advisory Council. […]