The second wave of St. Charles Parish collegiate signees was an impressive one, as 15 athletes from Destrehan and Hahnville High Schools put pen to paper at the annual spring Signing Day ceremony at the Satellite Center.

The 15 signees were a well-rounded group spanning five different sports, but all of them shared two commonalities: exceptional high school careers and the chance their hard work has afforded them to earn scholarships toward continuing their education and athletic pursuits.

“It’s such an exciting experience,” said Hahnville’s Kamryn Keller, who signed alongside four of her senior softball teammates after helping propel their team to one of the greatest seasons in school history. “We get to move on to the next level and it’s not something a lot of people get the chance to do. We have four more years to do what we love now.”

“Everyone that supported us through our whole journey came out today, and it’s so special for us to see them and for them to see us all together this last time,” Keller said.

Meanwhile, the collegiate destination for Destrehan’s Landon Marceaux has long been known, as the top recruit and right-handed pitcher committed to LSU early in his prep baseball career.

Whether he makes it to the school is not as clear, though, but for a very good reason: Marceaux is expected to be drafted by a major league baseball team, and where he’s selected and how the ensuing negotiations go in that process will likely go far in determining whether he ultimately decides to don the purple and gold or go pro.

Either way, Marceaux said he could appreciate the moment on signing day.

“It’s great to be recognized, to sign with LSU and to be called one of the greats at Destrehan and in St. Charles Parish,” said Marceaux, who was dominating through his full run with the Wildcats. “With the draft in the back of my head, I know it’s starting to get close and get real.”

Marceaux said he’ll fondly recall all the big games he was able to pitch in and share with his teammates, noting a dramatic first round playoff win over Denham Springs in his sophomore season and the many showdowns with archrival Hahnville among his favorite memories.

Hahnville track and field standout Ashlyn Jack, meanwhile, signed with the University of Louisiana-Monroe fresh off of landing an individual runner-up medal in the Class 5A 300 meter hurdles event and two others for helping spur the 4×200 and 4×400 relay teams to two more second place finishes.

She said she loved the environment at ULM, as well as the coaching staff.

“(ULM’s head coach J.D. Malone)’s energy really stood out. I want to be somewhere where they’re as excited to have me as I am to be there. He’d contact me every day and ask how I was doing, whether I was running track or cheerleading. He wanted to know about me.” 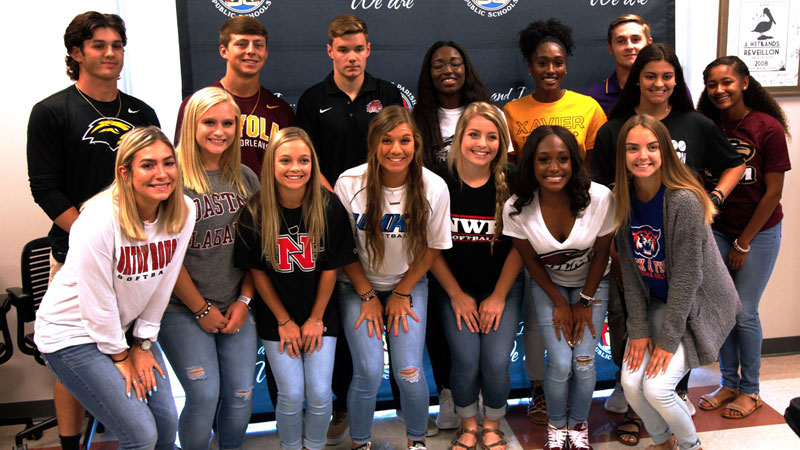