Joy Maddox wasn’t sure where to turn to even start the process of regrouping after Hurricane Ida, but she knew she needed help.

The aftermath of Ida hasn’t been easy for the residents of St. Charles Parish, and for Maddox and her family, the considerations went beyond the damage her Paradis home incurred – which was considerable. Maddox’s mobility is hindered by knee and hip replacement surgeries, and she cares for her 77-year-old mother who is on oxygen. Her 16-year-old grandson is autistic.

And through all of this, her 36-year daughter was hospitalized and placed into ICU Aug. 6, a term that necessitated eventual brain surgery which she underwent last week. She’s since been discharged, but she was hospitalized through the storm and her surgery delayed.

The four all live together, but as was the case for so many, Ida brought severe damage upon their home and community as a whole. It was a tough blow as it was, but especially so considering Maddox had just purchased the home on Aug. 20 after renting it for the past two years.

“Eight days later, wouldn’t you know it. We were devastated to see it,” said Maddox, who remains evacuated. “We’ve lived here for two years and we like it here, like the people here, so of course we wanted to stay. We don’t have a lot of close friends here … with taking care of my daughter, my mom and my grandson, it’s not conducive to a lot of socializing.

“So, there’s a lot of wind and water damage. Financially, we’re not in a situation to fix it or do it ourselves … you feel kind of helpless.”

She did reach out to a family friend, Celina Gregory, and as it turned out Gregory knew someone that might be able to help Maddox get the ball rolling on recovering her home. She reached out to Abby Chabert of Luling, a parent of a member of the Brother Martin wrestling team – the team was traveling in the area and pitching in to help members of the community with cleanup efforts.

“I asked if she knew anyone helping out … the next thing I know, there are six truckloads of teenage wrestlers, their coach and several parents going around to help people. I don’t know them, they don’t know me, but they heard about our needs and took it upon themselves to do it,” Maddox said. 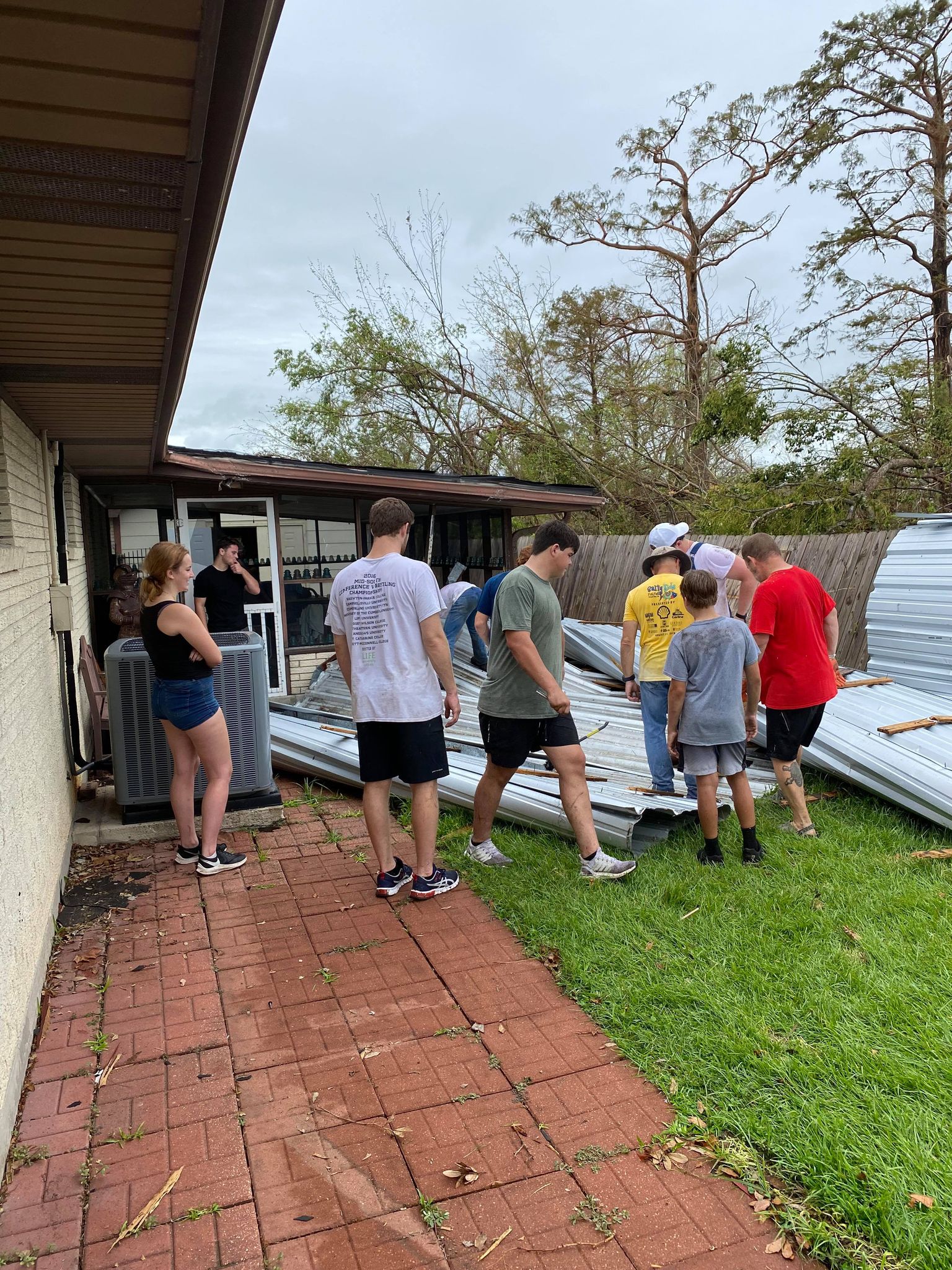 “I’m in close contact with our Crusader Wrestling head coach, Andrew Nicola,” said Chabert. “When we checked on each other and our wrestling families, everyone just asked who needs help. A few parents reached out and dropped their wrestlers off at the United Way distribution site on Hwy. 90. Coach Nicola, his wife, Amy, and their new baby, Ava came too.”

That meeting took the idea of helping out into a concrete plan to do so as soon as possible. Chabert was in contact with some families in need, and soon Maddox’s name came up. Chabert reached out to Maddox to get permission to help out on her property

The group took the time to clear Maddox’s yard of debris.

“Not a single wrestler questioned the space. They just got to work,” Chabert said. “Her yard was a total disaster and when we pulled up I thought it was going to take a while. Our coaches led the way and worked side by side. It was amazing and made me so proud to be part of it. Our boys used it as a work out.”

That night, while staying in Natchitoches, she received a photo text showing the progress made.

“This is an amazing group of kids,” Maddox said. “I offered to pay them and they refused. They wanted absolutely nothing in return. This was their last weekend off from school, and they could have used that to stay home and relax, but they wanted to help. That’s pretty special to me.”

After clearing Maddox’s yard, a 94-year-old neighbor asked if the group might be able to help out with her yard. 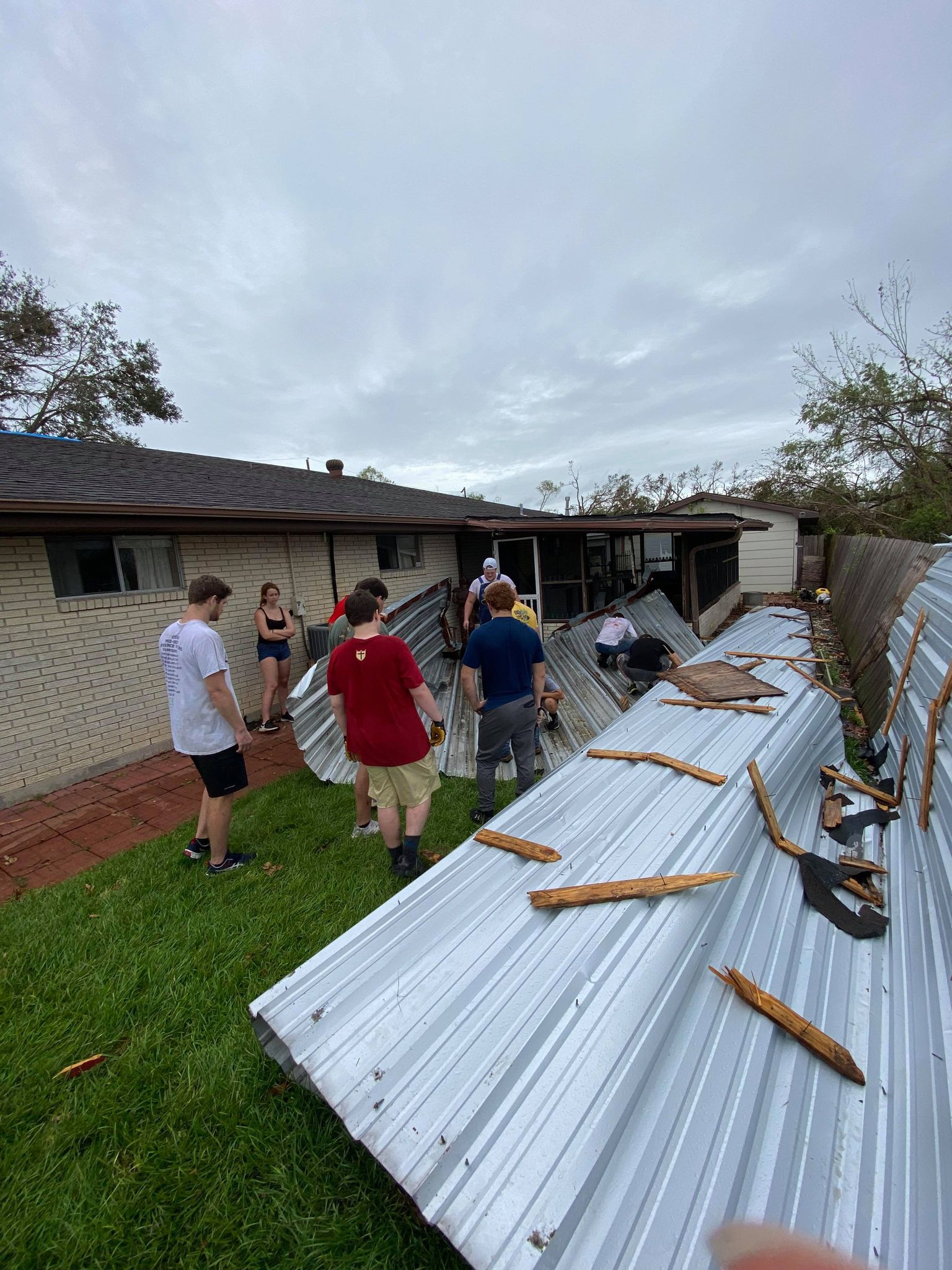 “They didn’t even question it,” Chabert said. “Then the neighbor behind her asked for help and they did that one, too.

“It was a domino effect. And just before those three, we were down the road helping another family. All from word of mouth. These kids were just doing the next right thing. Now that the team is back at school they all want to help.”

While Maddox said the family still has much to do – and will need help to do it – it went a long way toward putting her mind at ease on at least one major step.

“We’re not out of the woods yet. My daughter’s with us now, but we can’t return home just yet with the way things are,” Maddox said. “But they made it better. It’s not as dangerous out and around the house now … I just think it’s great. You hear so many stories about terrible things, but those kids have so much good in them.”

Chabert returned to help the effort at Maddox’s home Friday with a group of Tulane medical students, helping to rip up and remove carpet from the damaged interior.

“I’ve had so many reach out directly to me for help so I’ve been reaching out for more help to get more boots on the ground because our community needs us,” Chabert said. “Everything seems to be a waiting game or there’s a list or a cost. Some of these people just can’t do it so if I can help I will. When all this storm mess happened I was fortunate that we had minimal damage compared to others.

“Maybe I was spared so that I can help others. Who knows? Everyday I try to live with a purpose and Hurricane Ida has surely paved a path for those of us fortunate enough to help.”

Family and friends of Hali Coss, Lily Dufrene and Michaila Bowling are in the process of planning The Hali, Lily and Michaila Memorial Golf Tournament. […]