When the Trauths spotted “weird” lizards sunning themselves on their stepping stones in their front yard in Boutte, it raised a few questions.

“My husband (Buddy) and I were driving into the driveway one day when he slammed on the brakes and said, ‘Did you see that?! It was as big as a dragon,’” said Abby Trauth. “Since that day, we’ve been amazed at how big these lizards are. They’re much bigger than our usual green lizards and wayyyy faster.”

Well, they aren’t big as dragons (they don’t exist), but if there was such a thing they might look like larger versions of these rugged lizards or anoles.

“I’ve grown up in St Charles Parish and this is the first year that I’ve seen such an exotic looking animal (aside from an alligator) in my yard,” Trauth added.

This invasive species apparently came into the U.S. from plant nurseries more than 15 years ago. Guillot said he believes the brown anoles were here before Hurricane Katrina.

“I’ve grown up in St Charles Parish and this is the first year that I’ve seen such an exotic looking animal (aside from an alligator) in my yard.” — Abby Trauth

It’s a matter of brown versus green lizards.

These brown lizards were reportedly first seen in Florida, but it wasn’t until 1988 when it started being seen in larger numbers, Guillot said. Green lizards are indigenous to Louisiana, but the brown ones are apparently gaining in number because they can tolerate more heat in a number of hotter-than-normal summers.

In Boutte, Trauth’s neighbor told her he’d noticed the brown lizards for at least a year, but that it appeared the brown and green lizards were co-existing.

The scientists noticed them, too.

The green lizards are evolving with bigger, stickier toes to evade the more aggressive Cuban invaders. They compete for food and will eat one another’s young, but the green lizards developed the ability to climb higher in just the last 15 years.

But Trauth isn’t concerned, adding, “They’re probably only good for mosquito killing, which is great.” 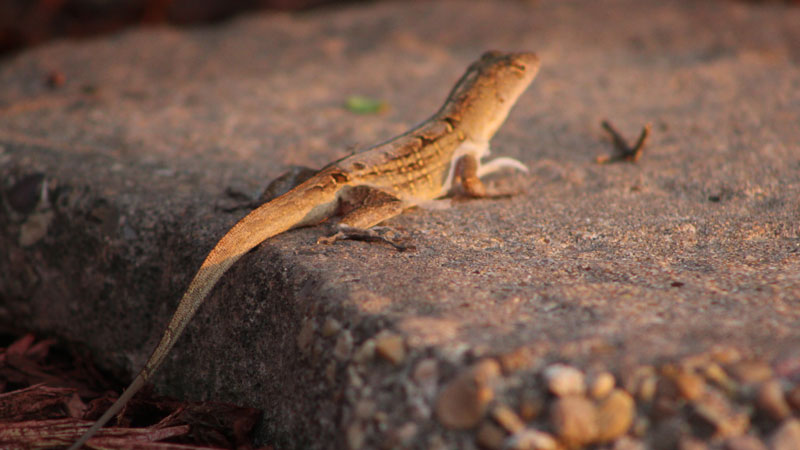 For close to 25 years, Mark Weber made visits to the St. Rose post office a little brighter. […]

Christopher Baird is committed to helping his community however he can – whether in person or online. […]

Historic openings for the Bonnet Carre’ Spillway in Norco in 2019 – with the area being opened twice for an extended period of time – left St. Charles Parish government and residents with a  major problem. […]