Leathaniel Newell is eager to put his newly gained job skills as a production assistant to work in the film industry and he’s anticipating a busy year.

“I’m looking forward to 2019 as we have a lot of projects to film,” said the St. Rose resident. “I’m rolling up my sleeves to get at it.”

Productions like Claws and Queen of the South are reportedly coming to Louisiana to take advantage of the state’s restored tax credits, and it means a lot for Newell as one of the people taking advantage of state-provided training.

Newell is a successful story locally, as well as for the state of Louisiana.

“I was unemployed and looking for a career change from driving trucks and wanted other employment,” he said. “I seized the opportunity to do a career change.”

Newell took a production class last year offered by the St. Charles Parish Business and Career Solutions Center, which is held in partnership with NOVAC (New Orleans Video Access Center) in New Orleans that helps with job placement. The organization has been in existence for 48 years, stepping in to help create jobs in the film industry.

NOVAC Executive Director Darcy McKinnon said Newell’s enthusiasm and desire to connect to the industry illuminated his path to the numerous opportunities they provided. He was among more than 750 people who have gotten work, and another 70 who got permanent jobs.

McKinnon also welcomed a busy 2019 and particularly for Louisianans who needed work.

Because Newell was unemployed, he got the training free and is finding work that also pays well. More recently, he completed classes in electrical work and grip training, bringing together skills that he said “makes everything go when shooting on the set.” This work could pay $60,000 a year and higher depending on the production.

“It’s been amazing. Some 30 individuals were in the first class, but several of them were working at film sites before completing the class.” – Tommy Scott

In September, he worked on the “Left Behind” movie starring Nicholas Cage and gave him his first IMDb film credit. He’s got two more coming with “Wendy,” a spin off of Peter Pan, and a small production in Baton Rouge.

“It’s been amazing,” said Tommy Scott, the Career Solutions Center’s director. “Some 30 individuals were in the first class, but several of them were working at film sites before completing the class. That’s how much demand there is.”

Not only did Newell find work, but demand for the class rose, too.

One is underway and another planned in spring, Scott said. More classes could be held with more requests of them.

“I think a lot of people are interested, but don’t know how to penetrate the industry, he said. “This has never been offered before in St. Charles Parish so I’m really proud to bring this opportunity to the residents.”

Newell is also one of Scott’s success stories.

His training in the PA Boot Camp taught him the do’s and don’ts of being on a production set. He learned set etiquette, the lingo and terms.

Newell has met actors Jamie Foxx, Morgan Freeman, Susan Sarandon and Kirsten Dunst, but his training taught him the rules about meeting them and staying on the job.

“You never ask for selfies or autographs … that’ll get you kicked out,” he said. “I just treated them like a regular person and told them I was a big fan and hope they enjoy their time here. You can’t be star struck. You have to be a professional.”

Newell said it’s also an industry based on reputation like being reliable, coachable and teachable that gets call backs.

As a production assistant, he works as a “busser” or catering to the needs of actors and actresses so the director and assistant directors work uninterrupted. It’s an entry level position, but he hopes to step up to “key PA” on future projects and do the hiring. 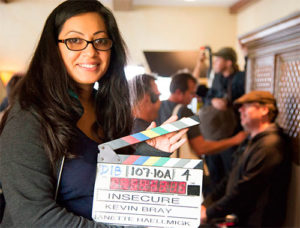 Entering the Class 5A baseball playoff field as the 27th seed, Destrehan earned a tough draw Tuesday night as it traveled to No. 6 Walker, and a sterling performance by WHS pitcher Caleb Webb spelled the end of the Wildcats’ season. […]

In 2018 the Butterfly Dome at Luling Elementary School was slated for demolition, but the hard work, dedication and tenacity of several school employees, community partners and the St. Charles Parish Women’s Club means the dome is now once again bursting with colorful flowers and fluttering new friends. […]

Last week, Ryk Frickey of Des Allemands was found guilty on a charge of aggravated criminal damage to property last week, stemming from an incident where he fired a shotgun through the door of a Luling home with residents inside in May of last year. […]