Whenever Sonny and Harry Ao stepped onto the doubles tennis court, the opposition was in for quite a battle.

After all, in a sport where trust and chemistry between teammates rule, who knows one another better than a pair of twin brothers?

Two standouts among a strong contingent of Hahnville players, the Aos wrapped up their prep careers on the court this season, helping spur the Tigers to their fourth consecutive district championship. For their part in those heroics, the brothers went unbeaten in district play this season in a return after the 2020 season was interrupted and then cancelled due to COVID-19.

“We started playing in the eighth grade,” said Sonny. “Once we got serious about it, we got on the court four or five times a week for two or three hours a day, then we got better and better.”

The chemistry between the two is real on the court. 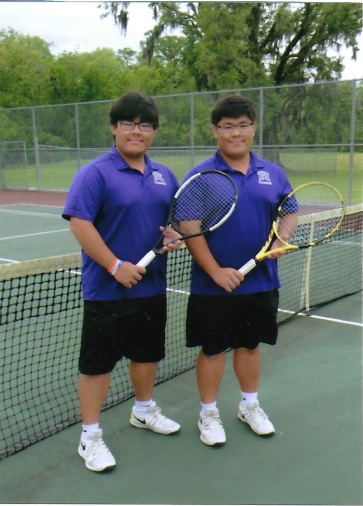 “When it’s someone you know so well, you can really just say, ‘OK, I know he’s getting that ball,” Sonny said. “And vice versa. We kind of have that … as twins, we just know each other. We’re not perfect, but when it comes to teamwork, I think we have that advantage because we’ve known each other our whole life.”

They’re not completely leaving the sport behind, but the two will be shifting focus as they will both move on from Hahnville to attend LSU, where each will major in electrical engineering. That subject will absorb the bulk of their attention, though they noted they’ll be up for intramurals when the time comes.

They like to stay active in the community, and credited Interact with helping them do that during their time at Hahnville.

“It was also a way to meet new friends,” Sonny said. “Destrehan also started an Interact club, so there was a mix of new people, more people in our district, and that helped us meet new friends.”

Both twins credited their uncle for inspiring them to go into electrical engineering, as the latter has made his career in the field.

“He’s been someone who’s been able to innovate creatively and build things,” Sonny said. “I’ve been really interested in becoming a software engineer, to program and make games, but the job field isn’t seeing many hiring. Things look better with electrical engineering than that field, so that helped guide the decision.”

Harry said he’s liked building things since he was very young, and has had his intentions wander between mechanical and electrical engineering before ultimately choosing the latter.

The two are happy to have one another for continued support as they take the step to college life.

“We’ll both be in the engineering dorm, and everyone there is studying for the same classes … I think we’ll be able to help one another, and I think we’ll have plenty of support around us,” Harry said.

Added Sonny, “Engineering is one of the more difficult things to take on in college, so it’s definitely a plus (to be going together).”

Des Allemands mother of five cooks, opens up donation station for the community

Jerri Lynn Cooper and her family evacuated from their Des Allemands home for Hurricane Ida, but Jerri Lynn said she couldn’t stay away for too long. Ever since she’s been back, the mother of five […]

The Rotary Club of St. Charles Parish announced this week that the 2021 Alligator Festival is cancelled due to parish-wide devastation from Hurricane Ida and continued difficulties surrounding the COVID-19 pandemic. The festival was scheduled […]