Given Ed Reed’s standing in the world of football, it may be only fitting the first major completed phase of the upcoming Ed Reed Park in St. Rose is its turf field, the turf installation officially completed last week.

A final walkthrough at the 40×100 field was held last week with turf vendors and St. Charles Parish’s Parks and Recreation Department. The multipurpose field can be utilized for multiple sports, according to Ed Reed Foundation program manager Courtney Aburn-Reisz.

“It’s not quite the size of a college football field, but it provides enough space for kids to play soccer, baseball, football, whatever they want,” said Reisz. The park’s being built from the back to its front, and that was its deepest element. The next phase will be to install the basketball courts.”

Reisz said the hope is that foundation work for those courts will begin March 2 and be finished within a month, with the building of an access road for the park also ongoing.

“There’s been a lot of rain on the front side of the park. (St. Charles Parish) has been building that access road in so the vendors can use that,” Reisz said.

Construction of a walking path, parking lot and playground will follow before the park is ultimately opened, with late spring or early summer the target date, Reisz said.

The park is roped off for now – though the field is complete, safety concerns over the ongoing construction has decision-makers on the side of caution. 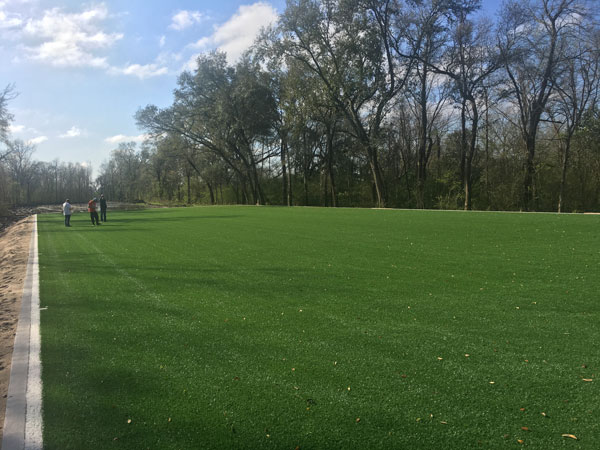 One recent addition to the plan is the Founders Walkway, where local organizations, families, groups or individuals can purchase a personalized, engraved brick that will help comprise the walkway and be a lasting part of the park going forward, with a minimum donation of $250. It’s intended to raise the remaining funds needed toward the park’s completion. 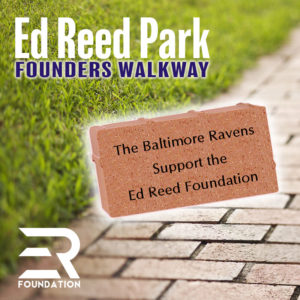 “It’s a way for those in the local community to have a hand in their park’s opening and commemorate it … you can engrave it with whatever you’d like to say on there, and it will be park of the Founders Walkway forever,” Reisz said.

Reed’s desire to build a park in his hometown stems from his belief that it’s a need for his community after an old park was eliminated in order to build houses. Ed Reed Park is being built near the neighborhoods of Turtle Creek and Preston Hollow where Reed, who was inducted into the Pro Football Hall of Fame last year, grew up.

The thought is the park provides access to safe facilities, positive programs and mentors, while serving as a symbol of hope and healthy choices for children, according to the Ed Reed Foundation. The park is being built on land acquired by the Reed Foundation in the St. Rose area and its construction has been collaborative effort between the Ed Reed Foundation, fundraising efforts, St. Charles Parish and other organizations.

It’s continued good news for Reed, who accepted a position with the University of Miami Hurricanes football program last month. The school through a statement Reed would be involved “in all aspects of the football program, including strategic planning, quality control, operations, player evaluation and player development.”

Two female entrepreneurs from Louisiana caused a quite a stir on and landed a deal as part of Friday night’s episode of ABC’s Shark Tank. […]

Hahnville takes off, flies by Airline in second quarter to open playoffs

It took Hahnville a little while to settle in for its Class 5A first round playoff game with visiting Airline, which trailed the Lady Tigers 16-15 early in the second quarter. […]

Dominance in paint keys second round win for Hahnville

While Hahnville struggled at times to put away its first round opponent Southwood, the No. 4 seeded Tigers put its finishing power on full display Tuesday night at home. […]