The recent announcement that the Norco Christmas Parade would not be able to roll this year was met with disappointment – the event has become a beloved tradition and family outing for community residents, but the 2021 edition ultimately became another casualty of Hurricane Ida.

But thanks to a little improvisation, not all of the parade’s fanfare will slip away.

Norco Civic Association (NCA), which puts on the parade annually, will still welcome Santa Claus for his traditional visit to Norco this Sunday. He will be riding through Norco with his reindeer – and maybe even a few elves – from 2 p.m. to 3 p.m. His route will begin at the Civic Association building, turn onto River Road and then onto Mary Street, weaving through several streets until arriving back where he started.

“I have received word from the North Pole!” wrote Renny Weber of the NCA on Facebook Sunday night. “Santa is saddened by the news of no Norco Christmas Parade and has agreed to still come visit us.” 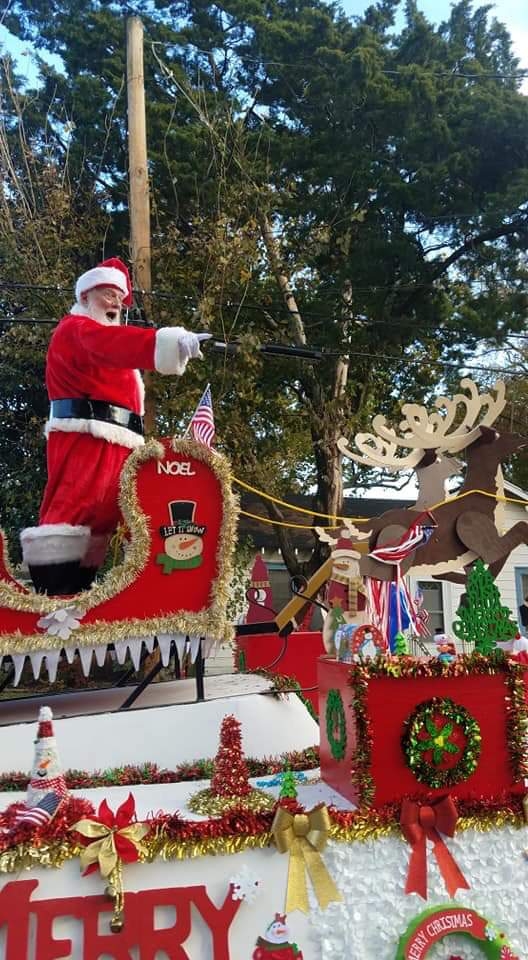 Weber said the response to the parade cancellation news made he and others want to figure out a way to deliver at least part of what made the annual community celebration such a popular event, and do it at a time many people could use a lift for their spirits.

That especially goes for children, who perhaps haven’t had the same opportunities to see Santa Claus over the past two holiday seasons than was the case prior. While the parade offers adults a chance to spend time with family, re-connect with neighbors and enjoy the show of floats, for children, Santa’s arrival has long been the event’s highlight, he and Mrs. Claus making a grand entrance by helicopter.

There won’t be a helicopter this time, but jolly St. Nick is arriving in Norco all the same.

“Everyone has a lot going on right now. People working through insurance claims, trying to get things back together,” Weber said. “A lot of kids live here in Norco and we’re trying to bring them a sense of normalcy for the holiday, to let them know Santa’s not going to forget about us here in Norco … we just kind of came up with the idea and ran with it.”

The parade cancellation news may not have come as a surprise, given the community’s situation following Ida. But it still came as a blow for many. This will be the second consecutive year the parade has been canceled, the 2020 edition sidelined by COVID-19. The hope then was to gear up for a big return in 2021.

Santa will be in the same sleigh he is annually during the parade, waving to the people out to see him. Weber said there could be a few children dressed as elves to ride alongside the man in red. The route was being determined this week, but the plan is for it to be in a central location so locals would not have to walk or drive far to see Santa pass.

“We want most to be able to see it without having to walk five or six blocks or drive,” Weber said. “I’ve already got texts and seen responses on Facebook, and it’s the kind of response you hope for. It shows  there are people in Norco who make sure the word gets out … that whole sense of, ‘We care about our town and the people in it.’ If this makes one person smile, it’s better than sitting back and just saying, ‘Oh, well.’ We needed to do something.”

Weber said it’s that sense of community that has been front and center during the aftermath of Ida, and it’s also why the annual parade has been such a hit over the years.

To sum it up, Weber says: People in Norco have each other’s back.

“It’s the reason Norco kind of grabs you … nobody really leaves Norco,” he said. “Everyone knows everyone. Everyone cares about everyone. This is a place families come to raise kids, to settle down … during the hurricane, people who maybe even didn’t know one another, will come five or six streets away if you need your trees trimmed, stuff moved out your yard, and help you.”

The parade is crafted around a theme every year and has served as an unofficial kickoff for the Christmas season, held on the heels of Thanksgiving on the first Sunday of each December.  In 2019, the theme was Norco Through the Years, with participants representing a decade of their choice. Floats, bands, dance teams, cheerleader groups and colorful characters – Batman, Robin, Santa Claus and Mrs. Claus are regulars – are annually part of the festivities.

Past themes have touched on traditions, paid homage to popular music and movies, honored veterans and highlighted major events like elections and the Super Bowl.

The parade was discontinued after a 30-year run from the 1950s to the 1980s. In 2001, a group of residents that included Weber’s father, Stephen, revived the event. The lone two times since 2001 that the parade was not held, prior to 2020, came due to a heavy rain event in 2016 and due to the aftermath and fallout from Hurricane Katrina in 2005.

Saturday’s voters will decide the fate of a $35 million proposal by the St. Charles Parish Public Schools School Board. […]

Hahnville fought back, surged after slow start in 1st season under Schulz

Todd Schulz called his first season as head coach of Hahnville a great experience with a special group of players.  […]