When Haley Taylor was named a Victory Belle at the World War II Museum in New Orleans, it was proof that dreams do come true.

It was her second time a 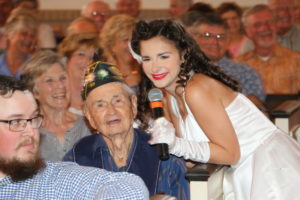 uditioning on “Stage Door Idol” or the museum’s 1940s style competition modeled after American Idol, but this time she landed the job and as the youngest Belle since the group’s founding. At 19 years old, she became an ambassador to the museum.

“Internally, I was screaming,” said the St. Rose native and Destrehan High School graduate. “Any actor’s dream is to act professionally. I’m getting paid to do what I love.”

Initially, Taylor had been told she couldn’t be a Belle until age 21 by the manager, but when it came time for auditions the same person called her and invited her to participate despite her age – and she did.

At the time, she was already doing six shows a day in the Polar Express Train Ride while also being a musical theater student at Loyola University. She sent a video for the audition and, immediately after submitting it, she got a call offering her the position.

“It was crazy,” Taylor said of the December audition.

In a moment she went from hugging kids in the Polar Express for a month to honoring military veterans for a year.

But Taylor was thrilled over the change because she’d worked hard to get noticed for her dream job and it apparently worked. 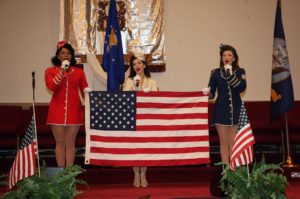 Being the baby of the group was intimidating at first, but fellow Belles stepped in to help.

By January, Taylor was in boot camp, a month-long process of rehearsal time. Every evening for three hours she learned all the music, dancing and “inside ropes to being a Belle.”

“It was overwhelming at first,” she said. “You’re learning a new number every night and then you’re performing the whole show before the manager just as if there is an audience in the theater. Usually, that’s the scariest part. You’re displaying everything you learned and assuring them they’ve made the right choice in picking me.”

Mandi Mueller, a nine-year Belle and an original member of the group, became her mentor and remains one of her best friends in the “Victory Belle sisterhood,” Taylor said. Mueller epitomizes everything that Taylor considers great about being a Victory Belle, she’s also the dance captain and makes sure the group looks its best, as well as having perfect 1940s hair.

Also, Keyara Milliner, who was hired as a Belle at the same time as Taylor and shared boot camp together, also became a great friend.

“We went through this crazy process together,” she said. “After we performed, we were told that our boot camp was the smoothest and that we performed the best they’d ever seen. We worked our tail feathers off – we really did.”

Only recently has Taylor started traveling out of state for performances, but the experiences are fast laying the groundwork for being a more traveled artist, as well as “honoring the vets with songs and dancing.”

She performed at a Kansas City nursing home with an estimated 700 people in the crowd, and then went to Mississippi to perform at two locations. The audience size relies on the location. At the end of every show, the Belles do a service salute and ask the veterans to stand or cheer if they’re in the Army or Navy.

“I’m just beginning to find my own personality as a Victory Belle … as this 1940s version of me and that’s been a lot of fun to play with and feeding off the other performers on stage,” Taylor said. “I’ve been meeting a lot of veterans and listening to their stories.”

One of her favorite things about being a Belle is looking out at the audience and seeing veterans singing along when they sing the Andrews Sisters’ “Boogie Woogie Bugle Boy.”

“You’ll see them singing to it or tapping to it,” she said. “We also do this number where we sing love songs from the 1950s and 1960s, and we go to the audience and find this lucky veteran and we give a bunch of kisses. We serenade them. We try to find the oldest vete 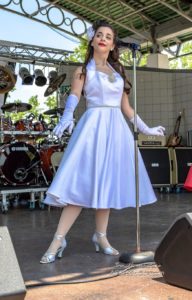 rans that we can find, especially the World War II vets. Later, in that song, we also pick someone to dance with. It’s just a lot of fun.”

Also, the Victory Belles are considered one of the museum’s “living exhibits,” reliving a time in history when the girls did this show at military bases.

“We’re trying to bring that back,” she said. “That’s why we try to get the makeup down and the hair right so we look like we just trotted out of 1940.”

Also, Taylor considers herself close to the military overall as her father is an Army veteran who served in Desert Storm.

“It’s a great reminder as to why we do what we do,” she said. “The Victory Belles wouldn’t exist if it wasn’t for all these men and women who sacrificed their lives for us.”

She also appreciates the real-life experience of performing and touring with the Belles.

“I feel it has made me a better performer because I’ve been performing almost every week,” Taylor said. “What I’m learning in school is great, and this is another part of that. It’s also made me a great communicator, as well as getting knowledgeable about the branches of the military. I think the Victory Belles is making me a more well rounded person, and I feel I’ve learned so much in just these seven months.”

Taylor is having so much fun she’s made a decision.

“I’m going to keep doing what I’m doing because I’m having a great time,” she said. “I’ll re-audition and keep going to school, doing the Victory Belles and looking to the future on what’s coming next.”

There’s now a new look, a new designation, and a new page in Shell Norco’s history as the Norco Manufacturing Complex has transitioned to Shell Energy and Chemicals Park Norco – the only such site in the United States. […]