Diana Jackson had just called 9-1-1 to report flames coming out of a neighboring apartment complex in Destrehan when she realized the families were probably still inside the building.

It was 9 p.m. when Jackson, a resident of a condo catty-corner of the burning on Brandon Hall Drive, made the call. When the dispatcher asked if people were outside and safe, it hit Jackson that no one was outside yet.

“Adrenaline took over and I started knocking on doors,” Jackson said.

Soon after, she was joined by a man (who had pulled over in a truck to ask if 9-1-1- had been called) and the police who all started banging on doors yelling, “Fire! Fire!”

As Jackson moved through the scene, she went to the back of the complex and saw flames coming out of the window of the apartment facing the parking lot. People from the burning complex had started coming out of their apartments, she said, and she offered her place to house them while firefighters went to work on the fire.

On arrival, the apartment comple 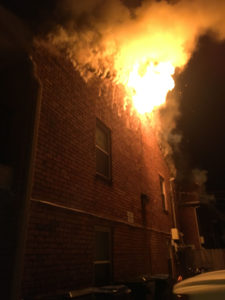 x was fully involved in a fire that was fast moving, Wenning said. Flames were visible through the roof, which was already partially collapsed.

“The problem was that apartment building has a common attic above all four units,” he said. “The heat went into the attic unknown to the tenants in A, B and D units.”

Unit C tenants were not home at the time of the blaze. But Wenning said the fire is believed to have begun in that unit in the AC closet on the first floor of the apartment. Although not yet confirmed, he said it was likely an electrical fire.

Tenants in the other apartments were at home unaware that the fire was spreading above in the attic, he said. It did not apparently set off smoke alarms.

“A neighbor supposedly saw it and got everybody out, which was a very smart move,” he said. “It had a lot of heat prior to us being dispatched.”

Wenning observed the roof partially collapsed from the rear of the building and soon after it fully collapsed, which posed access issues for firefighters. They extinguished the fire by 1 a.m. and the chief praised the firefighters’ determination to put out the blaze with little damage to the neighboring apartment complexes. 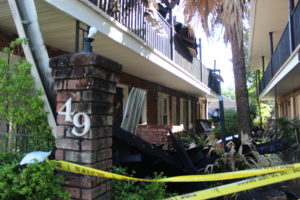 According to the American Red Cross, eight units were impacted by smoke, fire, water damage and loss of power. Of the four families who lost their homes, one of them included five children.

On the street, Jackson observed the displaced families gathering children and pets from the blaze.

“The kids seemed to be in shock,” she said.

Jackson watched families also saving pets, including an iguana and a larger lizard from their apartment, as well as a ferret; another family saved their hamster and still another family rescued a puppy. 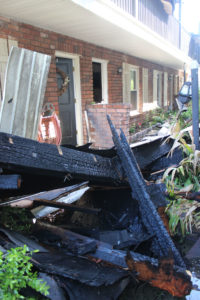 “Oh, my God, it went so quick,” Jackson observed of the fast burning fire.

Across the street, neighbor Duke Brown said it was chaos and there were people everywhere by this time.

“All I saw was a blaze shooting up,” Brown said. “That thing gave me the chills. Everything burned up and those people are starting over.”

Just 15 minutes later, Jennifer Hill, who also lives across the street from the burned complex, described the scene as horrific.

Both Jackson and Hill witnessed Good Samaritans and the American Red Cross come on the scene to help the affected families who lost everything in the fire.

“Everyone gathered around to help each other,” Hill said.

Good Samaritans appeared on the street offering them water and blankets, which was particularly important since Kay Wilkins, American Red Cross public affairs representative, said many of these families lost nearly everything.

“Many of these families walked outside with just a blanket on around their shoulders,” Wilkins said. 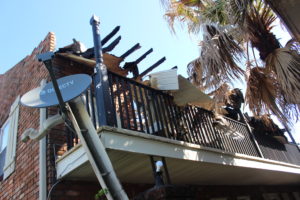 Wilkins said Red Cross case managers arrived on the scene assisting them and coordinated a reception area for them at the St. Charles United Methodist Church.

“It was very heartwarming to see the people not affected help the families affected,” Wilkins said. “There was a neighbor handing out water, jackets and clothing for a child. Others asked them what they could do for them. It was really good to see how this community came together to help.”

Wilkins also observed efforts to save the animals, which she added, “You’d never think you would have to care for lizards.”