On Friday, school officials cut the ribbon for the Learn With Us Bus at the Lafon Performing Arts Center in Luling.

Calling it a “truly magnificent day,” Superintendent Ken Oertling said the bus represents reaching out to children and parents in the parish.

Kevin Nicholas, the school district’s director of Federal Programs, said when he first heard of the bus he acknowledged “That’s a family center on wheels.”

The project is in line with the district’s move to expand pre-K education by reaching children and parents who couldn’t reach out to the school system. The parish has family centers at its six elementary schools.

A surplus bus was dedicated to the project that includes tables for Chromebooks where parents can check grades, sign up for free lunches and more.

“It was exciting,” Nicholas said of cutting the ribbon that officially kicks off the bus schedule. “We’re at the point now where we’re actually putting it in service.”

The Learn With Us Bus is visiting sites like apartments, churches, libraries and early childhood locations on the East and West banks. The bus will also offer playgroups, which are both a learning and support opportunity for parents and a ‘social’ playtime for children ages birth to 5 years old.

Playgroups for preschool children and their parents or caregiver will be held weekly. Nicholas said he hopes to increase visits to twice a week soon.

Valerie Chiasson is the lead family literacy teacher along with Val Rodrigue, who also drives the bus.

Nicholas also thanked the United Way of St. Charles for partnering with the School District on the project. 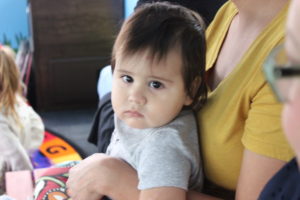 Alette Matthews has had a fascination with space as long as she can remember. […]