A growing number of St. Charles Parish residents have found a new, creative way to cope with social distancing.

They’re going hunting – just not in the way that’s typical for the outdoorsy community.

“Bear hunts” are gaining popularity as locals are putting stuffed bears in the windows or on the front porch of their homes for families to find – similar to an Easter egg hunt, but with appropriate distancing. The activity allows families to go for car rides and walks in their respective neighborhoods in order to spot the bears, and parents are saying it’s been boosting morale, especially among children.

The activity has been coordinated over social media between residents of several neighborhoods, and participation seems to beget more participation. 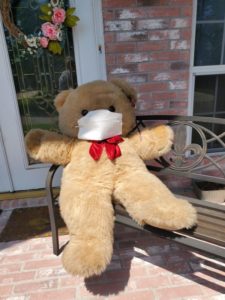 She learned of the bear hunt in her neighborhood and said it seemed like a great way to get out the house and change of a potentially stale routine.

“The kids have all enjoyed it,” said Smith, noting their ages range from 4 to 16. “The youngest loves to ride on someone’s shoulders and scream out, ‘bear!’ The older ones enjoy looking for bears and just being outside with one another. It breaks up the monotony and gives us a purpose and a bit of structure for our outside time.”

Smith said her mother wanted to participate but said she had no bears in her house. The family found some bear prints on the internet and now she’s involved as well.

Bear hunting has a few positive, unintended side effects.

“We’re seeing people driving slowly in their vehicles as people look and find the bears. It’s slowed down the speed on our street,” Smith said.

For Brittany Hamilton of Destrehan, her family of four – and nearly five, as Hamilton is expecting – is also enjoying the new experience.

“I was seeing many posts with bears in the window, so I told our kids who are 6 years old and 2 years old to go find some bears to place in our window,” Hamilton said. “We also have a large teddy bear that we stuck on our porch bench.”

Hamilton said it’s represented a chance for the community to stay tight knit and get involved while still maintaining distanced safety measures.

“Regardless of age … it gives the kids something to do, but anyone can get involved and enjoy themselves doing this,” Hamilton said.

Christy Jackson of Norco called it a chance to push anxieties to the side, if only for a little while.

“As we drove around looking for bears, we saw people in their yards and we waved,” Jackson said. “For some, we even stopped and told them that we were on a bear hunt. For older members of the community, it is a small way for them to make a big impact with the younger community. We now have a special Facebook page for bear sightings, which strengthens the community even more.”

Mandy Royal of Norco learned of the exercise after seeing a child’s face excitedly pressed against the window of a car passing by. She called it a symbol of community togetherness.

“When something happens in our parish we tend to all come together,” Royal said. “And to see that happen in at least a few parishes still brings a tear to my eye. We may have to stay six feet apart, but we still all stand together.”

When Steve and Shana Acosta got into their car in Ponchatoula to drive and meet Mason Dauphin in St. Charles Parish, all they could hope and pray for was the best. […]