After nearly three years of silence, the St. Rose woman identified as the rape victim pushed out of a moving vehicle on the Crescent City Connection in New Orleans has gone public.

“I need women to know they’re not alone,” said Trelva Wells. “It could happen to anyone.”

With Dave Turner sentenced to 15 years in prison in Orleans Parish, Wells is willing to speak out for herself and fellow victims of domestic violence.

On Feb. 2, 2016, she recounted how Turner showed up at her mother’s house unannounced and attacked her.

“When I walked out my door I got hit and fell backwards,” she said. “When I was able to open my eyes, he was standing over me and said, ‘You made my life a living hell. I’m going to make your life a living hell.’ He raped me. He choked me. The man did me in at my house. I gave a good fight until I couldn’t fight anymore.”

Turner overpowered her and flung her into his car, Wells said.

“At a certain point, when we went on the bridge, I knew he was taking me to this house and no one would see me again,” she said. “I reached down and got the pepper spray and sprayed him with it. I just wanted to get him to stop the car. That’s not what happened. He rolled down the windows, tried to get the pepper spray out my hand. I wouldn’t let off on it. We started coughing and choking at the same time.

“I don’t know how he did it, but he opened that door and pushed me out the car and that’s all I remember.”

Wells was discovered near the Loyola exit of the bridge. She awoke in the hospital surrounded by family and friends.

Turner was found guilty last year of attempted manslaughter and simple kidnapping by an Orleans Parish jury and sentenced to 15 years in prison. In St. Charles Parish, he faces charges of attempted first-degree murder and rape.

Turner was Wells’ finance’ and they have a son together.

“After my son was born, he became an entirely different person,” she said of Turner’s escalating jealousy over the child. “He called him ‘That baby,’ and we started arguing more than we ever did. After a while, he hit me and I left. I called him and said it was over.”

But it was apparently far from over when she learned Turner had a restraining order placed on her alleging she was harmful to their son, she said. However, a judge restored custody, placing the child in her care Monday through Thursday and to Turner, Friday through Sunday.

Soon after, Turner attacked Wells in St. Rose and denied doing it,although he was filmed by camera on the bridge, she said.

Last year, after their son repeatedly asked about his father, she brought him to the courtroom to see Turner for the last time before he went to prison. It also represented closure for Wells. 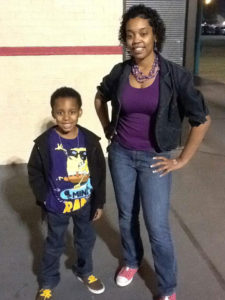 But, during this time, she also recounted receiving numerous emails and messages from women describing their own experiences of domestic violence. Wells said it took time for her to face her trauma, but she was overwhelmed by how many women had reached out to her.

“It’s almost like a silent killer,” she said. “People don’t talk about it, but it happens. It’s not a happy home and I don’t think we should be quiet about this anymore. Had I known more about this I might have seen the anger signs, and no one talked about it – it shouldn’t be that way.”

Although Wells struggled with these emotions, too, she concluded no one should be blamed for something they can’t control.

And there were so many heartbreaking stories from fellow victims, she said. Until her attack, she didn’t realize how prevalent the problem was and now these victims were confiding in her.

“There are too many women telling the same story,” she said. “We need to be making this public and maybe it won’t happen as much if we make this a big deal. It’s not fair.”

Wells organized a fundraiser Oct. 6 in Kenner to share her story with the public, as well as raise money for the St. Charles Parish Sheriff’s Office’s Crime Victims Assistance department, which helped pay her medical bills. A “Celebration of Life” party followed the event for fellow survivors of domestic abuse.

Now, as she recalls being in court and seeing Turner staring at her with no emotion, she has one lingering question about what happened to her.

“If I had the chance to talk to him, it’d be just to tell me why … help me to understand,” she said. “The problem is that’s a question I will never get the answer to, but I want to know why.”