The St. Charles Parish Sheriff’s Office has apprehended Felix Polkey in connection with a Friday (O 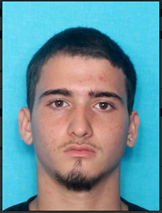 Polkey, 20, of 13575 Old Spanish Trail, Boutte, is a suspect in the shooting of a 20-year-old man, unnamed by the Sheriff’s Office, at a residence around 2:30 a.m. in the 100 block of Kennedy Street. The man was shot in the back and taken to an area hospital where he was treated and released, according to the Sheriff’s Office.