Police officers and other personnel were huddled in a room at J.B. Martin Middle School, each person waiting for a call to spring them into action — a training scenario designed to prepare them in the best way possible for the worst of situations.

Every other summer, the St. Charles Parish Sheriff’s Office holds this active shooter training, which requires every deputy to go through one of the sessions over an eight-day stretch.

While another joint, bi-annual exercise involving the parish’s Sheriff’s Office, school system and other emergency responders is held at one parish school every other year, this week’s training was focused on police personnel and offered additional freedom for coaching and immediate suggestions and feedback. 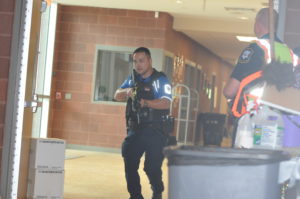 “We’ve been doing this for about 15 years … we like to move to different schools to learn the layout and gain familiarity,” said St. Charles Parish Sheriff Greg Champagne. “We do it at school because it’s a place with a lot of vulnerable targets, but it could be anywhere. We’ve seen it in industrial locations, newspaper offices … we’ve seen all of it.

“This is not only a way to teach the basics to all of our employees, but we’ve seen the tactics of the killers change with time. We’re trying to be prepared.”

Around 300 law-enforcement officers in all went through the training, from a variety of different posts. Champagne said that even if an officer’s position doesn’t traditionally put them in position to use what they would learn in the training, the kind of emergency depicted could potentially call for anyone to be called into action.

“We put every single deputy through this because in the event of a tragedy … wherever it may be, you never know which deputies are going to be closest to the scene and have to respond,” Champagne said. “It could be detectives, crime scene investigators, a bailiff, process server … we want them all to have the training so if and when they go inside that building, they know (how to approach the situation).”

He noted the exercise teaches basics, objectives, how to neutralize a threat, responding to trauma, administering first aid and assisting the injured, and clearing the facility.

During the exercise, deputies were called individually and in teams from a briefing room set up in the school when it was their turn to go through the exercise, and it is not known when the call will come. Other officers portrayed scenario actors, be it those who are injured, innocents who may be hiding from the shooter or the actual shooter.

“A corrections officer may not need to use this on a regular basis … but any given deputy may be able to respond and help save lives,” Champagne said.

Officers credited with saving man who tried to jump into river

A late June call to the St. Charles Parish Sheriff’s Office could have ended in tragedy if not for the quick thinking and applied training of Deputy Paul Quick and Deputy Alexis Agnelly. […]

An arrest has been made in the case of the shooting death of Ama man Darnell Ingram, who was found dead in his vehicle Sunday night on Vidal St. in Ama. […]

A 36-year-old Ama man’s life was claimed Sunday night as result of an apparent shooting near his home. […]