The invasive species known as the apple snail has been reported in the Mimosa Park area of Luling.

“They are up and down the canal on Primrose Drive,” said resident Ardine Jones.

Jones’ husband, who gets up mornings to walk in the neighborhood, first observed their bright pink egg casings, some as long as five inches, attached to things like branches and stumps. “They are the same color as Pepto Bismol pink. It’s gross. The snails are huge.”

In fact, the snails got their name from getting as big as an apple.

LSU Ag Agent Rene Schmidt said no one should touch them because they carry rat lungworm disease and their brightly colored eggs are toxic. This mollusk has few predators.

It’s a space invader that spreads by riding the water current and leaves as many of them of behind as moves on, according to Schmidt. They are prolific breeders in fresh water, but they can live out of water for a short time, too. Their egg masses indicate they can produce a lot of snails. 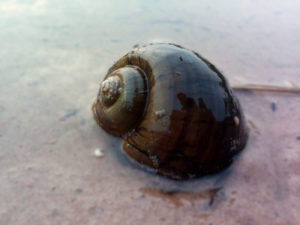 Schmidt observed them in small areas about three years ago.

Pesticides can’t be used on them without killing other snails.

“The only method I’m aware of as somewhat controlling is to knock the red egg masses into the water where they drown,” he said. “The adult snails can live in the water, but the eggs aren’t capable of surviving in the water.”

A broom or hoe will do the job, Schmidt said.

The apple snail’s threat is its voracious appetite for vegetation, which means it can starve out fish and crawfish.

For this reason, the snail is a threat to crawfish, particularly in cleaning out the rice fields that is typically food for crawfish.

Schmidt said the snail also clogs up the traps used to catch crawfish, which has caused some crawfish farmers to quit the business.

“The biggest caution is, because these are an invasive species, these snails are not allowed to be harvested or sold,” he said. “In addition to that, people need to take caution because they can carry rot lung.”

This means don’t eat or handle them.

Schmidt warned this is particularly concerning for children who typically play in these ponds or canals, and are more likely to handle them.

“These apple snails are not only a hindrance to private landowners with ponds, but also they pose a significant or important economic impact to rice and crawfish farmers.”

After Hurricane Ida, Boutte’s Shawnya Williams was looking for a change in her career path. What she came up with adds up to the town’s newest business. […]