The St. Charles Parish Sheriff’s Office is preparing its deputies should they encounter the super drug called “gray death” or heroin laced with synthetic opioids so potent it can kill by touch.

“As of now, to the best of my knowledge, we have not had any experiences with the ‘gray death’ drug currently trending on social media,” said Cpl. James Grimaldi, spokesman for the Sheriff’s Office. “We are currently researching the drug and putting together an internal training so that our patrol deputies will have some knowledge and be able to readily identify it better, in the instance that it is encountered.”

But it has made its way to Louisiana.

Last week, St. Mary Parish Sheriff’s Office issued the warning not to touch the drug when it made arrests in connection to “gray death” for the first time in the parish. The drug has been reported throughout the U.S. and connected to thousands of fatal overdoses in the nation’s opioid crisis. 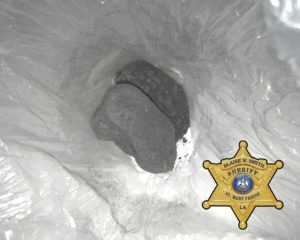 Samples of the drug have been found to contain the designer opioid drug U-47700 or “pink” that has been connected to psychotic disorders, as well as heroin and synthetic opioids including the pain drug fentanyl and carfentanil (used to tranquilize large animals including elephants) or a varying mix of them. It is taken by injection, smoking, snorting or oral ingestion.

Louisiana police departments are issuing warnings not to touch or inhale “gray death” because it can be toxic or lethal in even small quantities. Described as a lethal combination of some of the most deadly opioids, gray death is a combination of drugs like carfentanil, making it 100 times more potent than fentanyl, and 10,000 times more potent than morphine. It is typically gray in color varying in consistency from a hard, chunky material to a fine powder, and often made in a block resembling dry concrete or cement.

Nationwide, the drug was first reported on the streets in late 2017, resulting in 47,600 opioid overdose deaths at the time. But overdoses have been growing year over year, and the treatment has proven less effective.

Grimaldi said the typical addict is only “chasing the high” with little regard for exposing family, friends and even pets to a drug that can kill by simply touching it.

“The hardest part seems to be that people with these addictions don’t know how to get away from their foolish desire, or don’t know where to turn to for help,” he said. “They need to consider outside help from support groups, medical professionals, or even faith-based groups that specialize in helping people fight addiction and remove these poisonous toxins from their normal diet.”

Better late than never – prep football season begins in St. Charles Parish next week, and what a way to kick it off.   Destrehan will visit Hahnville next Saturday afternoon at 3 p.m. (Sept. 25), […]

School may not be back in session yet due to the aftermath of Hurricane Ida, but five Boutte children are proving that there are still many life lessons to be learned outside of the classroom. […]

Lee, along with fellow rushers Trey Nixon, Patrick LeBranch and Brandon Freeman, controlled the offensive flow on the ground, particularly in the timed quarter portion of a scrimmage that also involved sets with a pre-determined number of plays between the first and second teams for each squad.   […]