Was found on train tracks, became popular with children

If one believes in karma, the journey of Thomas the pit bull might stand as a worthy argument in support.

The once stray pit bull recently found a new home and happy conclusion to his time in St. Charles Parish, but were it not for an intense streak of loyalty he displayed not long ago, he might not have made it to his new home, or even be here at all.

He was found after an emergency call to assist a dog on a train track. Thomas was there with another dog who had suffered fatally after a direct blow from the train.

“Thomas wouldn’t leave his side, as the faithful friend he was,” said Dr. Jena Troxler, animal shelter supervisor.

He was found by animal control officer Jessica White, who brought Thomas back with her to the animal shelter, as well as his fallen friend, so the pit bull would feel comfortable leaving.

Upon arriving at the shelter, he was diagnosed with heartworm disease. He began receiving treatment, and soon began to raise his profile and popularity at shelter events, where he became something of an ambassador.

Troxler brought Thomas to an adoption event held at Lakeside Mall, and he was a hit with those in attendance. 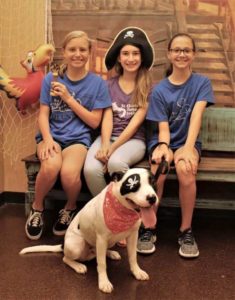 “He was a perfect gentleman that day,” Troxler said. “He quietly laid by my feet, even with kittens we brought for the adoption day. One of the workers there that day recently came with her children to visit the shelter and asked if Thomas had been adopted.”

The answer to that question was no, to that point in time. But after his public debut, Thomas went on to make appearances with Troxler at high school and middle school career days as she highlighted veterinary medicine, and also at parish summer camps. Of course, he was a popular name called during visits to the St. Charles shelter as well, for people to take the friendly canine out for a walk. Children adore him, which made him a prime go-to for public events.

Still, while Thomas had won the hearts of both staff and volunteers at the shelter, he was overlooked for more than six months as he waited for a family to call his own.

“Thomas wouldn’t leave his side, as the faithful friend he was.” — Dr. Jena Troxler

That is why there was plenty of joy to go around recently when shelter workers received the news: Thomas had officially been adopted by a new family in Virginia Beach.

Thomas was part of a recent transport of nearly 30 dogs to the Virginia Beach SPCA in search of prospective adopters for longtime shelter pets. It took just three days on the adoption floor for Thomas to find his new home.

“I know there are a lot of happy tears being shed right now for him at the St. Charles shelter,” said Suzy Swims of the Virginia Beach SPCA. “He’s everybody’s favorite boy.”

Thomas’s trek to a new home

For nearly 10 years, hungry residents have driven to 12371 Highway 90 in Luling to enjoy a delicious meal at Mariano’s Italian Eatery – but that changed last week. […]

The end to the 2019 volleyball season left a bitter taste for Destrehan. […]