In an effort to support frontline healthcare workers, Shell recently partnered with the Governor’s Office of Homeland Security and Emergency Preparedness (GOHSEP)  and the Louisiana National Guard to bring 10,000 KN-95 PPE masks into the hands of those working around the clock to save lives in hospitals across South Louisiana.

After securing the masks, Shell called upon GOHSEP to determine the areas where the masks were at the most critical need, and the National Guard to connect the items with those destinations.

Rochelle Touchard, Shell Norco External Relations Manager, said the company’s manufacturing locations  had received numerous requests from hospitals., both locally and in the New Orleans area, for additional PPE items were any available. That prompted Shell to look into means to acquire PPE to then deliver them where needed. They struck success and were able to secure 10,000 masks, and from there the focus shifted to addressing the widespread need in the best possible way.

“The Governor’s Office has their homeland security department that’s able to identify the most critical areas where things are needed,” Touchard said. “10,000 sounds like a lot, but when you start piecemealing things here and there, is it enough to make the impact it needs to make? We wanted to make sure we did that and provided the most value and service we could to the receivers.”

“So we partnered with GOHSEP to say, we at Shell are going to donate these masks, and we’re asking you to ensure they get to the most needed areas. We provided a listing of the requests we received. At the time, people weren’t really giving us a number figure. They just knew they needed them.” 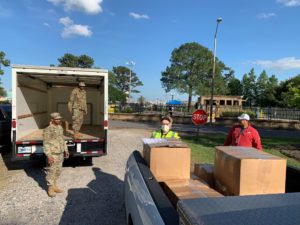 Finding that helping hand from the Governor’s office, Shell determined, would be for the best. Once the masks were delivered to Shell’s Norco Manufacturing Complex, National Guard representatives picked up the equipment and began making deliveries.

“It was the right thing to do as a good neighbor to our community,” Touchard said. “And to our region as a whole, as well.”

It was one example of what has been a growing effort by Shell to aid the local community during the coronavirus pandemic. Shell Norco was able to deliver PPE that it had available on its site to the Norco Volunteer Fire Department. It also supplied meals to St. Charles Parish Hospital healthcare workers as a thank you last month, catered by the Seafood Pot.

Touchard said that was one way for Shell to provide a lift and show support to two important entities at once: not just the hospital employees, but also a local restaurant battling through its own obstacles brought forth by the pandemic. Providing meals for its own employees who had to perform essential work on-site was another avenue to do so, Touchard noted.

“We all know that the stay-at-home was difficult, even with the transition into Phase 1 … people were going to be suffering in different ways,” Touchard said. “We’re trying to find opportunities to help however we can, and to recognize the front line heroes working so hard to get us though this.”

Audrey Champagne Raziano says when her family first began the Fishing for Frankie fundraiser tournament to honor the memory of her brother, nobody ever dreamed it would endure the test of time like it has, a community staple for more than a decade – and that’s why last year’s forced cancellation due to COVID-19 was tough to accept. […]

St. Anthony of Padua celebrates 60 years as a church parish

Efforts of special needs volunteer have been life changing