Whether it’s to visit a friend’s house, or to see the doctor or to simply go outside and play, Wrigley is there. For Rownd, who has muscular dystrophy, his buddy represents a certified life-changer – Wrigley is his service dog, and has been for the past two and a half years.

Even when Rownd goes to school, Wrigley sits at his side. Heck, the dog has perfect attendance at that, having attended class with Rownd for the entirety of his 7th grade year at J.B. Martin Middle School.

That gave the staff at J.B. Martin an interesting idea – since Wrigley was virtually part of the class, why not make it official?

Thus, among the photos of seventh graders,, there’s not one but two Rownds pictured: Wrigley made the yearbook.

“Wyatt was ecstatic,” said Jessica Rownd, Wyatt’s mother. “They asked him if he wanted Wrigley in the yearbook, and he’s like, ‘Of course! He’s part of the class!’ I posted the picture on Facebook and everyone loved it. They all say this is so cute, that this is awesome.” 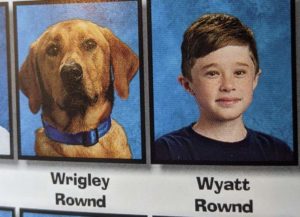 Wrigley’s photo was accompanied by his full name underneath, “Wrigley Rownd,” and was alongside Wyatt’s own photo. It was also clear that Wrigley was ready for his closeup.

“They asked, ‘Do you think he’ll sit?’ He’s a service dog, he was ready,” Jessica said with a laugh. “Everyone’s been so excited about it. Especially because most in the community know Wrigley is always with us.

“It’s kind of the perfect combo. He went to school all year with Wyatt, and this was the icing on the cake. He got his time in the spotlight.”

Aside from his friendship, Wrigley’s role is to help Wyatt day to day through the complications of living with muscular dystrophy. Wrigley helps to keep Wyatt calm, and he’ll pick up items for Wyatt, who cannot bend to do so because of his condition. Wrigley can open handicap doors and push buttons with his nose or paw.

“It’s really amazing what he can do,” Jessica said.

The Rownds had considered a service dog in Wyatt’s early childhood, but wanted to wait until he got a bit older to make a move. Service dogs can make a considerable difference adding quality of life for people with special needs, but they also represent a significant financial investment that often may not be feasible without some assistance.

The family found that assistance, but it took a little while. One charity turned them down, while others had considerably long waiting lists – and no guarantees.

“We got really lucky,” Jessica said. “We wanted to really make sure we did everything right from there, because we certainly didn’t want to ruin (Wrigley). It was a long process … his trainer was flying all over with him to make sure he would be good in the plane with us.”

The yearbook presented a fun highlight in a year that’s been trying for many reasons. As it stands, Wyatt may not have the opportunity to return to J.B. Martin’s campus, as he has elevated risk of COVID-19 complications due to his condition, were he to contract it and has been doing at-home learning.

“It’s going,” Jessica quipped when asked how home schooling was going. “Someone joked with me that I’ll get something for Teacher of the Year, and yeah, right … Wrigley makes everything easier, though. He’s pretty much doing the same things … when Wyatt is doing his work, he’ll curl up under his feet, almost like a foot rest. It helps kind of keep (Wyatt) in the routine of staying in school.