Poem to be published in Teen Ink

Guchelle Williams started writing poetry as a freshman as a way to express her inner emotions. It’s become her passion, and she can now say she’s a published writer as a result.

The Hahnville High senior’s poem, “Should I be?” reached the No. 1 spot of submitted works on TeenInk.com. It also will be published and featured on the cover of Teen Ink magazine in an upcoming issue.

It was a moment of great pride for Williams, who said her early poetic works were a struggle to put together, but that her growth as a writer from year to year brought added confidence with it. And the reception for “Should I be?” she said, is the biggest confidence boost yet.

“I just felt joy and excitement when I heard the news,” said the soft-spoken Williams. “My heart was really racing. I never thought this poem would touch other people in the way it has. It’s really a dream come true.”

Williams said she felt inspired to write the top-ranked poem after watching a movie on Netflix that she related to. The poem touches on the subjects of dealing with pride, religion and the way people respond to it and the kinds of fears harbored in the human mind.

“I wrote it as if I were speaking to my mother, because I know she’d never judge me,” Williams said. “It was really based on my feelings and fears and things I feel I could only truly express through my writing.” 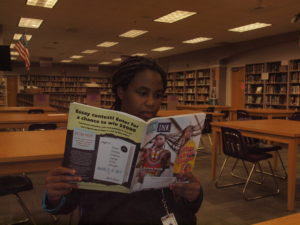 Other poems she’s written and submitted include one called, “The house I grew up in,” that centers around Williams, her parents and the family issues they’ve pushed through together over the years.

Williams joined Hahnville’s poetry club as a freshman after a friend encouraged her.

It wasn’t easy, she admits.

“When I started, it was horrible,” Williams said. “I couldn’t form a proper sentence in poetic form … I wasn’t interested in poetry at first, but I wanted to try it out. But by my junior year, I really got into it. I wanted to express myself and this was the one way I found I could find relief with my feelings. I realized I fell in love with poetry.”

She credits Hahnville librarian Belinda Sopczak with providing encouragement and motivation to keep at it during her learning curve, and ultimately helping her become a better writer.

“It was really based on my feelings and fears and things I feel I could only truly express through my writing.” – Guchelle Williams

“I started to find my rhythm,” Williams said.

Rhythm was a word Williams went back to a few times when describing her process. Revisions, additions and subtractions only come after the base of her work is complete. When Williams starts, the words flow until her page is full.

“I might ask (Sopczak) to help me fix anything she notices or to make sure it makes sense. My whole thing is I need to have that rhythm going,” Williams said. “That’s when it just comes natural to me.”

She plans to continue writing following her graduation and attend college to study literature. First, though, she said she will enlist in the National Guard, something she feels will help her grow as a person while allowing her to do good things for others and her country.

“I felt I wasn’t mentally or physically strong enough,” she said. “When I started looking into it, it really grew on me. I felt it would be a great challenge for me … I feel like if I can grow as a writer like I have and if I can go into the military, then I can do anything.”

But beyond that, she said, it’s all about poetry. She hopes to publish a book one day, and she said she’s going to push to make it happen.

“I love it. Poetry is my life,” Williams said. “Hopefully (a book pitch) gets accepted. But if not, I’ll keep trying. You fall, and you get back up.”

When his team needed him to take control, Cameron Lumar went on the attack. […]

MLK’s Dream continues to live on through annual march

The weather was cooperative for the 37th annual Martin Luther King Day March in St. Charles Parish on Monday, as a large group of participants came together to celebrate and honor the great activist’s incredible legacy. […]