For Karley Voges, dancing is not just a passion, but a way of life.

It’s been that way all her life, in fact. The Destrehan High senior has been at it since she was just two years old, with a mother who has long taught dance and an aunt who has her own studio, Kelli’s Kreative Dance.

“I grew up in that studio,” Voges said. “I just fell in love with dancing.”

For the past four years, Voges has been a key member of the Desty Darlings dance squad at DHS, helping her team to compete – and win – at the national level of competition. More importantly, she said, she’s found so many lifelong friends through her love of dancing. 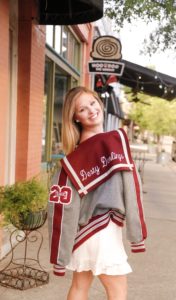 “It’s a sisterhood,” Voges said of her relationship with her fellow Destys. “Those are my best friends. Be it the upperclassmen, the underclassmen … I never want to lose their friendship.”

Voges is headed to Southeastern University to continue her education, where she’ll be a member of the school’s nationally ranked dance team, the Lionettes. Her strong resume with the Destys has prepared her to take that step: she served as co-captain of the team as a junior before taking on the role of captain during her senior year. She helped guide her team to several major accolades, including state championships in the Louisiana American All-Star competition in the jazz and hip hop categories last year, while the team climbed as high as ninth in the national rankings for hip hop routines.

“It was an awesome experience,” Voges said. “One thing I’m proud of is we accomplished something new each year. In my freshman year, that was the first time we got to the finals for hip hop. My senior year, it was the first time for jazz. We kept building on what we’ve done.”

She said it was an adjustment to take on the captain’s role as a senior. As a co-captain, a big part of her role was keeping practices light and making sure everyone found the right balance of enjoying themselves while working hard toward their goals. But as a captain, the responsibility grows, especially for a team with strong expectations.

“You’re now setting a game plan and trying to lead by example,” Voges said. “You’ve gotta be early to every practice. And sometimes, you have to separate your friendships from your responsibility to lead, put it aside and deal with the things that need to be dealt with. It’s a completely different role and experience.” 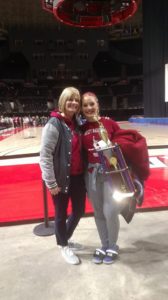 Through it all, she has been able to shine with her teammates under the guidance of her mother, Micque, who is the squad’s sponsor.

Voges said she and her mother have butted heads here and there, but she credits the latter as the inspiration to be at her very best.

“I look up to her so much,” Voges said. “The past four years have been such an amazing experience, and there’s nobody I’d have rather shared that with.”

Voges has also been a member of the student council for four years, including serving as its vice president in her sophomore year, and she was named to the homecoming court as a senior.  She teaches dance lessons and also volunteers in the community, including at different senior living facilities. She plans to one day become a dental hygienist, hopefully moving on track to attend LSU School of Dentistry.

The smart money is on her achieving just that, as she enters this next chapter of her life appreciating the value of hard work.

“Dedication is how you keep growing and growing,” Voges said. “(The Destys) worked so hard, practicing routines non-stop … that’s what brought us to success.”

With recent improvements to the grounds and plans for an addition in the fall, Destrehan Plantation Executive Director Tracy Smith said he is excited about the future of the East Bank attraction. […]

Aaron Campeaux is the owner of one of eight tow companies in the country that will be featured on season two of A&E’s original series Hustle & Tow. […]

The long journey of Ed Reed Park from an idea to a reality culminates this month, with the St. Rose park’s official soft-opening Thursday.   […]