Were life fair, Renee Hebert would be teaching her beloved fifth graders at Ethel Schoeffner Elementary. Instead, she’s recovering from kidney failure, and her eventual return to the classroom is up in the air.

Hebert spent nearly two weeks in the hospital after falling into diabetic ketoacidosis, which is rare in Type 2 diabetics like Hebert. While she’s doing much better now, weeks removed from the mid-February situation, she’s not 100 percent.

But at this point, the fourth-year teacher and Des Allemands resident is happy to be alive. She wasn’t sure that would be the case when she first fell victim to the illness’ symptoms.

“I was very, very weak, dizzy, disoriented … I had my daughter bring me to the hospital very early that morning, but we didn’t even make it two or three miles away from the house before she had to call 911 to have the ambulance pick me up on the side. They couldn’t even get a vein, I was so dehydrated.”

After receiving medical attention, she was released — but the problems only progressed.

“It got worse. The school knew something was wrong … I wasn’t interacting with anyone,” she said. “I was basically just there, then going to sleep. There was a point I didn’t know if I’d even wake up.”

Eventually, she called a fellow teacher and friend at Schoeffner to bring her to the emergency room. She underwent sudden dialysis to remove the toxins from her blood.

“It got worse. The school knew something was wrong … I wasn’t interacting with anyone.” – Renee Hebert

The ordeal was hard for not just Hebert, but also her 18-year-old daughter Madeline. It was Madeline’s birthday the second time Hebert was brought into the emergency room for medical attention, and between balancing school, work and caring for her mother, it has all been taxing. On top of that was the obvious emotional impact of Hebert’s health trials. Hebert, a single mother, also lost her mother at the age of four and father at 20, “so it’s just she and I.”

“I was so out of it that morning … my friend asked if I had a cake for my daughter, and it was like oh my gosh, I didn’t realize,” Hebert said. “I see her at the hospital and suddenly it’s happy birthday, I’m in kidney failure. Of course I’m crying my eyes out.

“She went through a very hard time. They were very supportive of her at her job, she was able to take a month off. But it hit us financially too. She pays her own bills and between the hospital, school, work … She’s had to grow up fast.”

A GoFundMe page titled “Renee’s unforeseen expenses” has garnered some support, with several stepping up to contribute to helping the teacher pay for her hospital care and other expenses.

The emotional support offered by her second family at Schoeffner, she says, is a big part of what’s pulled her through a dark time. Students made cards for her and she had numerous visitors from the school. And several got together to completely clean her home — because of her condition, Hebert cannot afford to be around anything that could infect her or make her sick as she recovers.

“It was so very uplifting,” she said. “(Schoeffner) is definitely a family. To have everyone in the community supporting me, it’s done nothing but help.” 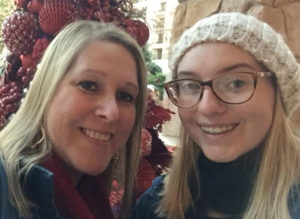