Whether he’s playing an instrument,  singing for a crowd of people or portraying the most dastardly villain in a stage theatre production, the Hahnville High graduate feels a charge when he takes in that audience reaction.

“You just get this feeling of joy … I love playing for other people and to see the smile on their face,” Rogers said. “You evoke a certain feeling out of people that you simply don’t get unless there’s music playing.”

Rogers will study music and theatre at the University of Southern Mississippi, and leaves Hahnville with plenty accomplished under his belt. A recent production of Matilda stood as Rogers’ 24th stage production since he began pursuing theatre in elementary school. He’s a proud alumnus of the Hahnville band and self-taught in several instruments. He was a member of choir and the Green Club at HHS, but he also found time to be very active in the community – he was the recipient of the St. Charles Parish Rotary Club’s Young Person of the Year award.

Rogers says his best instrument is saxophone, which he plans to play at Southern Mississippi. He took after his older brother in that regard, whose work with the instrument inspired Rogers early on in his life.

“He started playing sax, but he stopped because he got braces,” Rogers said. “I really wanted to play it, and that got me started there.”

But theatre is a passion that stands equally to his love of music. He didn’t necessarily know it at first, though.

“It’s kind of strange in comparison … in the first through fourth grade in Jefferson Parish they kind of force you to do theatre. We moved to St. Charles Parish when I was in fifth grade and I knew I liked doing it, but I wasn’t 100 percent into it like I would be,” Rogers said.

Things changed in his freshman year. He credited his theatre teachers for bringing him out of his shell and teaching him what the art form could truly offer. Upon completing the musical production “In the Heights” that year, he knew he was on the stage for good.

“That’s when I knew I wanted to do theatre, always,” Rogers said. “The people I met during that show, who pushed me during that show … (classmate) Caleb Vedros helped me a lot. He’d bring me home every day, we’d sing the songs … it was a big reason I wanted to stay in theatre.”

As far as his favorite characters? They come from different ends of the spectrum. He portrayed Roger in the St. John Parish Theatre production of Grease, the youngest and most innocent member of the T-Birds. What stood out to him more about that show was the cast, which brought what he called an unmatched, incredible energy level to the performance.

His other favorite saw him play the antagonist: Mayor Josiah Dobbs in the Hahnville production Bright Star. And, 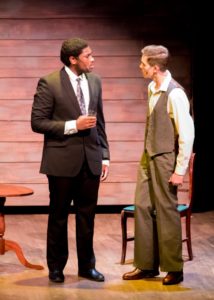 to say the least, Dobbs doesn’t leave much debate when it comes to where he falls on that good/bad spectrum.

“He throws a baby off a train. When we got there … I mean, everyone in the crowd reacted. There was confusion, everyone started talking,” Rogers said. “When I took a bow, everyone actually booed me, and that fueled me to want to keep going. It was a lot of fun.”

The multi-talented student likes to use his gifts to make others happy. He’s been a regular part of the Mardi Gras parades at Ashton Manor where he plays music and uses his voice as a Christmas caroler.

Rogers is thrilled to be going to Southern Mississippi, where he’s had his eye on since researching it for a school project in middle school. By the time he took a theatre field trip there in high school, he was hooked.

Glen and Michael Ganucheau worked alongside each other as medical technologists in the lab at Ochsner Medical Complex – River Parishes for years. […]

Rain derailed plans for the second annual Juneteenth celebration in St. Charles Parish last month, but this Saturday the festivities are on.  […]

Justin Jefferson beamed as he reflected on being back at home in St. Rose after exploding onto the NFL scene as a rookie last season.  […]