Although early in the flood season, the Mississippi River is rising and has already overtaken Spillway Road in Norco.

The river reaching 15 feet at the Carrollton Gauge prompted the Corps in New Orleans to step up to daily inspections of the river levees.

Roe said the National Weather Service forecast the river remaining above 15 feet through Jan. 25, and expected to crest at 15.5 feet on Jan. 21. The level has to reach 17 feet high to trigger opening the Bonnet Carre’ Spillway.

“However, river conditions are changing daily and may result in extending the flood  fight inspections,” Roe said.

Increased patrols help ensure the Corps and levee districts’ ability to respond quickly to any areas of concern that may develop along the levee system because of the elevated water levels, he said.

The Phase II activation applies to the levees along the river from Baton Rouge to Venice.

On Thursday at 9:30 a.m., the Corps will practice removing and replacing up to 20 needles on the weir as a practice exercise.

Rising waters from rain and melted snow typically comes in March to early June, he said. But the Corps is keeping an eye on weather conditions.

Though the recent flooding locally as result of heavy rain has led some to speculate the Bonnet Carre Spillway could be opened for the second consecutive year, there are no plans to do so at this time.

Chris Brantley, the spillway’s project manager for the U.S. Army Corps of Engineers, said the decision to open comes when the river is flowing past the spillway toward New Orleans at a rate of 1.25 million cubic feet per second. Brantley said the current rate stands at 1.1 million.

“We’re always prepared, but right now, there’s no indication we’ll need to open up anything,” Brantley said. “There’s a little more capacity right now. Now if it fills to capacity and there’s the potential for more water to come, that’s what they’ll look at and then you’ll have the potential to open it. But we’re not sure right now that we’ll have a lot more water coming.

“The river is high, a high discharge, but that may not necessitate it being opened.”

The spillway has been in existence for 91 years but has only opened 12 times in that time. It has been opened two times in the past three years and four times total since 2008. The most recent occasion came on March 8 of last year, and prior to that openings in 2016, 2011 and 2008. Last year’s opening saw roughly half of the spillway’s 350 bays opened. The last time all bays were opened came in 1983. 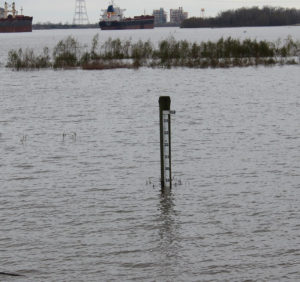 George Garcia, 69, a native of Luling, LA passed away on January 7, 2021 while under the care of hospice. George is survived by his mother Alice Cavalier Garcia, brother Frank Garcia, sisters Bobbi Arceneaux […]

Authorities are searching for a construction worker who was struck in an apparent hit and run incident and fell from the Hale Boggs Bridge Thursday. […]

For just the second time this season, Hahnville tasted defeat. […]