Comparing the noise to a jet hovering above her house, Montz resident Shannie Borne said Entergy’s prepping of its soon to be in operation St. Charles Power Station recently rattled their houses.

The good news is the “steam blows” or clearing of the power station’s turbines is over, said Kevin Wright, Entergy’s senior manager of capital projects. All that remains are the routine sounds of construction.

Target date of operation for the power station is May 23.

But residents endured the bellowing steam blows from early March to March 13.

“It was so noisy that people could not sleep at night,” said resident Coleen Perilloux Landry. “It was as though it was in your house.”

Landry said Entergy should have sent out a robo call to citizens of the area on the emergency list to tell them about the power station’s start up and the expected time it would take.

“Sometimes, it lasted over a 24-hour period,” she said. “It has my whole house shaking and the windows rattling. This was being done during the night hours.

“It was not handled well at all. If Entergy is permanent in Montz it needs to learn to be good neighbors.”

“It has my whole house shaking and the windows rattling.” – Shannie Borne

Kent Greene, an Entergy service representative, said they did notify residents through the St. Charles Parish communications department, as well as put out notices on the parish’s TV channel and Facebook pages with the parish and Entergy.

They also sent out robo calls, which are messages to the surrounding area notifying about testing that could have “elevated volumes of noise” in the Montz area, Greene said.

“We tried to do everything we possibly could with the elevated noises and they were only temporary in nature,” he said. “This will not be how the power station will be like. Once the steam blows were at the end, the noise levels would subside at that point.”

Greene added, “We want to thank our neighbors for their support and patience during the St. Charles Power Station’s testing period. We understand that the testing may have created elevated noise levels, but the critical steam blow testing is complete and was necessary to ensure the safe and reliable operations of the plant.” 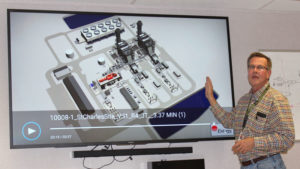 Powering up the station

Approximately 150 boats took to the water for a parade in Des Allemands Saturday, many of which displaying flags in support of President Donald Trump, and just about all adorned with the American flag. […]

by Gulf Engine & Equipment - 1 day ago

by St. Charles Herald-Guide - 4 days ago

by St. Charles Herald-Guide - 4 days ago