History would record what was once known as the “worst rail disaster in the United States,” and how the community of Montz became the keeper of this terrible memory.

“My father spoke of it often,” said Coleen Perilloux, whose family is rooted in Montz. “At that era, people traveled more by train from the River Parishes than by automobile because not everyone had an automobile. It was the year before he got married and he took the train frequently from New Orleans to Montz.”

Perilloux recalled her father telling her that “until bodies were identified or someone spoke up about having someone on the train, no one really knew who some of the burned bodies were.”

It was Nov. 11, 1912 when a speeding freight crashed into the train and cost 14 people their lives, leaving many more injured.

The Picayune headline was, “Midnight Excursion Train Halted at Montz, by Mishap, Run Into by Speeding Freight Which Crushes and Cremates Cars Crowded With Passengers for Woodville (Miss.).”

The scene was chaotic and graphic.

“The wreck occurred in a remote location, slowing medical assistance from reaching the victims,” according to the book, St. Charles Parish, Louisiana: A Pictorial History. “The water supply was inadequate and there were few buckets to use. Injured passengers able to flee the train sought refuge in the nearby cornfields, which were illuminated by the wreckage flames.”

The Associated Press reported the wreck was caused by the freight crashing into the rear of the excursion train. Five of the 10 coaches burned and many of the bodies of victims were believed to have been cremated. Passengers from the front coaches rushed to the burning ones and dragged injured and dead from the flames.

“Both the dead and wounded were scattered about the cornfields of Montz,” according to accounts. “Many long hours passed before a doctor was able to reach the scene.”

“At that era, people traveled more by train from the River Parishes than by automobile because not everyone had an automobile.” — Coleen Perilloux

It would not be until the next day before the injured received medical care in New Orleans.

A weeklong investigation soon followed that included convening a St. Charles Parish grand jury, as well as a joint inquiry of state and interstate commissions at Baton Rouge. It was the first of its kind to be conducted in the U.S.

The results led to blame being directed toward the Yazoo and Mississippi Valley Railroad Co., as well as employees. They were cited for “poor judgment, poor training and poor equipment.”

The AP further reported that a statement issued by the rail company said the the wreck was caused by a brakeman who failed to obey orders and signal the freight train. 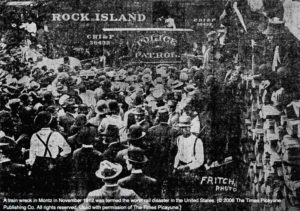