Parish spokesman Tristan Babin said Cochran has been transferred from the Intensive Care Unit of University Hospital to another part of the hospital where he has begun physical therapy. He added that Cochran’s health continues to improve and he has remained in constant contact with the parish. 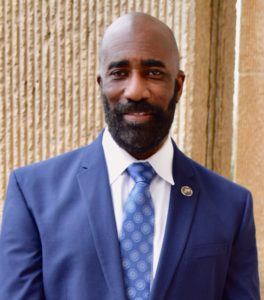 Raymond said he has spoken to Cochran daily since the accident.

“You won’t see any change whatsoever,” Raymond said. “I’ve been involved with our day-to-day activities since Day One. We’ve been fortunate to get some pretty good people in their roles up here and it’s just a matter of people doing the things they were doing before.”

Raymond said he’ll handle things that would have gone to Cochran’s desk, but it will mostly be business as usual.

“Ninety-five percent or more of the individuals throughout other departments will be continuing to do what they were doing before,” he said. “The overseeing process is easy to do when people are doing the jobs as normal. There will be no domino effect. The few pieces (of Cochran’s responsibilities) I’ve had to lay hands or eyes on are minimal but not enough to cause any bump in the road.”

Raymond, 61, served as St. Charles Parish Councilman from 2008 to 2012, representing District 1. The Southeastern University alumnus was named chief administrative officer in January of 2016 after Cochran’s election as parish president.

He said shifting roles has been made more seamless because contingency plans were set into place early in Cochran’s tenure in the event he or Raymond had to step away from their duties for any reason or length of time.

“It was put into place long before,” Raymond said.

Cochran was a passenger on the motorcycle that crashed and was taken to a local hospital to be treated for his injuries, according to a statement released by St. Charles Parish.

The crash occurred shortly after 7:40 p.m., according to the Sheriff’s Office, in the 100 block of Oaklawn Ridge Drive in St. Rose.

Cochran’s daughter Madison, 19, was driving the motorcycle, according to the St. Charles Sheriff’s Office. She was treated and released from the hospital with minor injuries.

“My daughter and I are truly blessed beyond words,” Cochran said through a statement. “Something as innocent as teaching my daughter how to drive a motorcycle in front of my home can change from excitement to tragedy in an instance. I am thankful that my daughter sustained only minor injuries in the accident. I have a few broken bones and some bruising that will heal in time. I am so grateful for the calls and continued prayers from so many. It makes me proud to live in such a caring parish. Regardless of how simple a short ride in front of my home may seem, it was my responsibility to insist helmets be worn, a lesson I am fortunate enough to talk about today.

“As your parish president, ensuring that the day to day operations of parish government run uninterrupted is very important to me … I am in constant contact with and have the utmost faith in my CAO and administration. Again, I’d like to thank the residents of St. Charles Parish for all of their support.”

The Sheriff’s Office confirmed Madison Cochran was issued a traffic citation relative to careless operation of a motor vehicle, having no motorcycle endorsement, not wearing a safety helmet in use and having no proof of insurance.

Larry Cochran was issued a citation for not wearing a safety helmet.

Destrehan resident Kim Costandi was athletic and involved in sports year-round when she was growing up, but adult responsibilities and motherhood meant she had a hard time incorporating exercise into her weekly routine. That is, […]

Sisters Kala Smith and Shalina Burlak grew up in St. Charles Parish and knew they wanted to open a business there. […]