The statement seemed innocuous at first to Linda Rhodes of Bayou Gauche.

“’You know, you have bees,’ they told me,” Rhodes said. “They saw them flying around outside. We’d never really paid attention to it.”

But the bees hovering around Rhodes’ garage window were seemingly growing in number – and there was a reason for that. The shutters for the window were obscuring what those insects had been up to: they had built a massive hive and honeycomb between the shutter and window.

While a beekeeper is set to take and displace the bees elsewhere this month, Rhodes actually wasn’t and isn’t fearful of the swarm. In fact, inside her garage, one is able to watch the countless bees tirelessly working behind the glass, and she finds it fascinating.

“They’re usually in boxes … you never really get to see that,” she said. “We were shocked and excited to see it. We really didn’t know what to do at the time … they’re pretty amazing to watch. And oh my gosh, they work all the time. You go in any time of the day and they’re working in there, working on the hive, making the honey. I’m excited about them.”

The bees would not have had to work in secret for long to establish their honeycomb. The honeycomb structure comprises of a series of hexagonal cells created from beeswax usually containing raw honey. It can take about seven days to two months for bees to make their honeycomb. In about seven days from the early build up and moving in, honeybees can add from one to three pounds of honeycomb inside the structure.

Indeed, Rhodes’ window serves as a display of sorts to this effort – think an ant farm, but for bees in terms of the visual.

She’s learned a bit more about her new flying friends since first discovering them. When it gets cold, they all tighten up in formation. At one point, the hive got so big it began to push the shutter outward a bit.

Another time, the bees seemed to be leaving the nest, though it wasn’t for good.

“The queen took them off somewhere. Apparently, they needed something from the outside to keep building that hive. It’s been pretty amazing to watch,” Rhodes said. “They’re driven. They’re busy bees, without a doubt.” 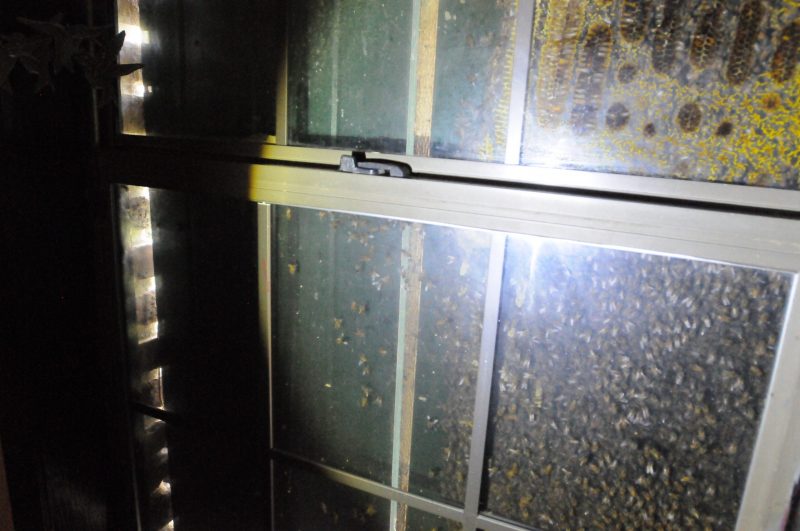 They also aren’t wasteful with what they make.

Though she’s grown fond of her visitors, ultimately she had to make the call to have them removed. That day is coming, though they’ll be able to continue their daily routine elsewhere once that happens, safely for both themselves and others.

“I wanted to get someone local to do it,” Rhodes said. “This (beekeeper) lives near us … I thought it would be nice to keep them local. I wouldn’t be surprised if they find their way back one day. For a hurricane or something like that, they’re protected behind that shutter.”

They also largely keep to themselves, Rhodes said, one reason there’s been no real urgency on her part to have them removed until now.

“They’ve never really bothered anyone,” Rhodes said. “They’re starting to come out more now that it’s a little warmer, and fly around outside. They’re busy doing their own little thing though, not worried about anything else.”

Audrey Guidry Miranda Friloux passed away peacefully at her home on Tuesday, April 20, 2022. Daughter of the late Myrtle Kliebert Guidry and Antoine Guidry. First wife of the late Joseph A. Miranda, Sr. Current […]

Suspects are innocent until proved guilty in a court of law. Arrests • Toriel Flot, 26, of 339 Alexander Street in Boutte, was arrested May 1 and charged with aggravated battery (two counts). • Malik […]