Possible contamination on the former Pan American refinery site in Destrehan has jeopardized a 200-unit apartment complex and may require further testing on property for the proposed 58-lot Saints Place Subdivision.

The site, estimated at 1,400 acres total, was once a refinery from 1914 to 1958. The refinery has been dismantled and the location is now a wooded area that’s been remediated, but Councilman Paul Hogan  said he approached the Louisiana Department of Environmental Quality (LDEQ) with concerns raised by his constituents over whether the site is safe for residential use.

Project architect Joey Murray said the estimated 40-acre site has been approved for residential use and does not require the samples, which LDEQ confirmed in a letter to him.

‘The area we’re working on is the unrestricted property only,” Murray said of the refinery site.

At an estimated 1,400 acres, the sprawling refinery site rests behind Plantation View Medical Offices on River Road at I-310 with a portion of it purchased by Destrehan businessman Todd Trosclair for an estimated $10 million development.

In April, Trosclair announced plans for the residential project along with a business park.

But Hogan said, on behalf of constituents’ concerns, he approached the LDEQ with questions about the site.

“I just want to make sure if we’re going to approve a subdivision on the old Pan Am property … I want to make sure there are not health issues or concerns associated with future homeowners,” Hogan said. “It seems to be the same concern that LDEQ expressed.” 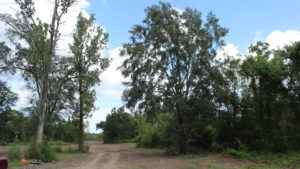 LDEQ spokesman Greg Langley said additional samples were requested as a precaution, when the land approved for industrial use was instead being used for residential use, to ensure it meets requirements for this use.

Michael Albert, the parish’s planning and zoning director, said the project is not being delayed now, but it could be in the future.

“Nothing has changed for the project right now,” Albert said. “There could be a problem depending on LDEQ and this will come up when the project comes up for construction approval. This project is at the preliminary phase.”

He added, “This is totally an LDEQ matter.”

The subdivision project returns before the Planning Commission in October with changes, including a vegetation buffer and traffic circle requested by Councilwoman Mary Clulee.

“They’re revising the shape of the subdivision,” Albert said.

But he also said they’ve received a LDEQ letter authorizing residential use for the subdivision site.

Albert said this is a process aimed at reclaiming land, but emphasized, “It’s got to be done right.”

“It seems to be the same concern that LDEQ expressed.” — Paul Hogan

Hogan agreed, saying he doesn’t oppose the subdivision project, but noted this is the time to ensure there aren’t problems with it down the road.

“We need to make sure we help the developer before he spends all that money and then finds out he has a problem with a subdivision that he can’t sell. I want to make that point clear. I’m trying to help the developer,” Hogan said. “We need to find this out before the construction plans are approved and the development doesn’t get in that situation.”

Murray said the site is suitable for residential use, recounting an estimated 11 tractor trailers of dirt removed from the property as part of remediation and new dirt brought in its place.

The council approved the subdivision preliminary plat for the project.

Murray added the entire refinery site has assigned uses – residential, commercial and/or industrial, which created concerns about the neighboring 200-unit apartment complex, a $25 million project. He says developer, Todd Trosclair is rethinking the apartment project proposed on land with restrictions, which could become office space.

Becca Hillburn remembers the doubters she had growing up, and she also remembers the hurdles she had to clear on route to becoming a professional comic artist and, ultimately, a graphic novelist. […]