Caylee Clancy is an animal lover with a soft spot in her heart for the broken.

The Luling woman has fostered numerous pets over the years, the one thing many of them sharing is that they were once known as problem cases, some through physical injuries — one of her foster projects was struck by a car and needed surgery and rehabilitation — and others finding issues when socializing with people or other animals.

Each of these cases are examples of Clancy taking the road less traveled and opting for a challenge.

And with five dogs of her own, and though she is pregnant, she hasn’t slowed down.

Her latest foster care pet, a three-year-old lab mix named Charlie, needed a great deal of help socializing after he was given up by his former owner.

“I like challenges,” said Clancy, a worker at the St. Charles Parish Animal Shelter. “I don’t find it overwhelming. Once I find those little triggers, those things I can fix to help make them better and make everything easier for me, it keeps me going.”

She added she has a very supportive husband who encourages her to go for it. 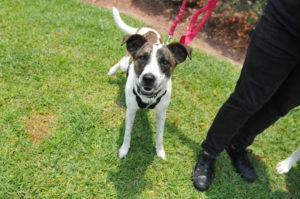 “He tells me it’s up to me,” she said. “And I’m not disabled. I find (Charlie) actually helps me. And the result when they go to their forever homes, it’s just the best.”

Clancy said many of the people who have adopted dogs she’s fostered have added her on Facebook and stay in touch so she can follow their progress. Many of those dogs started off in a difficult place, and it warms her heart to see them thrive.

In Charlie’s case, her family was moving away and did not feel they could keep her. When Charlie arrived at the shelter, she didn’t take to it well at all.

“She flipped her collar,” Clancy said. “After her owner left, she ran smack dab into one of our glass doors. She was just so nervous … when a dog is in such a new environment with people who they don’t know, their hearing is so much more sensitive (in a loud environment) … it can be very stressful.”

So Clancy, who has fostered more than 10 animals since starting at the shelter, took Charlie in.

At first, both dog and foster owner had to feel one another out, and it wasn’t necessarily a piece of cake.

“She had a bladder infection and was having accidents for the first couple of weeks, which can be frustrating for anyone,” Clancy said. “But you have to learn them. They teach you when they want to go outside. She would walk over to the back door and make no noise … I had to learn, when I see her disappear for a minute, it’s time to go open the door. You kind of train each other.”

Charlie also loved to chew things, which was alleviated by making sure she had lots of toys to chew on.

But while Charlie was quite shy at first, it didn’t take long for her to get on well with Clancy’s other dogs. That in and of itself, she said, was a huge sign of progress. 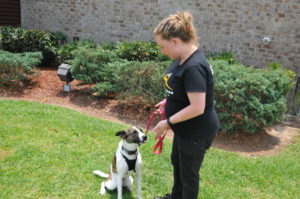 “They need interactions with people. Even if they’ve been socialized before, it needs to be kept up,” she said. “In some cases, you have one who is totally defeated. The shy ones who shut down here (at the shelter), those ones I like. Sometimes putting them in a house with five other dogs goes a long way by itself, and she’s done phenomenal with both dogs and cats.

“Those other dogs make her feel more confident.”

That confidence was on full display at a recent dog park visit, when Charlie showed a great personality with other pets and strangers alike.

Whether it’s an injured pup nursed back to health, a Doberman who was chained up for three years of his life, or a Charlie who has to readjust on the fly after being separated from his family, seeing them make strides toward their official adoption day with a new family is all the reward Clancy feels she needs. She hopes to see that day come for Charlie soon.

“Seeing the outcome and knowing where they came from … even if they’re never 100 percent, they had a shot and were able to flourish with it,” Clancy said.

Kindergarten students at Mimosa Park Elementary celebrated their 100th day of school this past week. […]