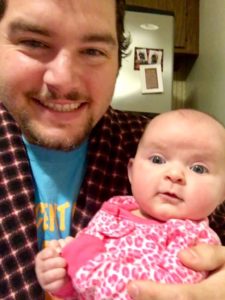 a baby, they immediately replied, “Yes, us.”

“I was completely shocked because who gets asked so easily ‘You want a baby?’” Valerie said. “We had been wanting our own children for 1-1/2 years, but we were always open to adopting. To get that opportunity, I think I cried and I jumped up, and danced around. I was beside myself.”

Word had reached them about the child from Austin’s mother, who knew of a couple in Tennessee who didn’t want to give up the yet -born baby, but agreed they couldn’t afford to support her. They were young, homeless and already had three children.

By telephone, she announced to Austin, “Hey, you want a baby?”

When Valerie got the news, Austin said she just burst into tears. It was a miracle for the couple, but Austin said his mother had been wanting a grand baby for years, too.

“It as an answer to a prayer,” Valerie said. “We knew this was God providing us with a child and we both agreed if there was a child who needed a home – all we could do was say ‘Yes.’”

From the start, the St. Rose couple had agreed to the possibility of adoption, but they could not have remotely guessed what was next. They feared something would go wrong in the process as it had for so many adopters. But once the opportunity presented itself – so immediate and quick – the couple decided this had to be real, although they the next three months would prove to be anxious ones.

“We were prepared for the worst,” Austin said. “Our adoption attorney was frank with us, but we felt we could get the greatest gift that could be given.”

The couple reached out to the birth mother in Chattanooga, Tenn., and that’s when the first of many miracles came.

She let them be with her in the delivery room whe 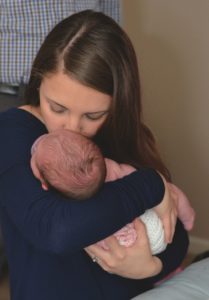 n the child was born in March. They were the first to hold her, which has left a lasting bond with the new little family, and they named her Addison.

“It was one of the greatest acts,” Austin said of the couple giving up the child. “They decided to give the child to someone who could provide and love her. It wasn’t an easy decision at all. We have respect for them doing this.”

When the new parents held the baby, they realized their heart’s desire was happening.

“It was really mind blowing because I have had friends who have adopted and I know it was no easy process, but I was just shocked that everything just moved so smoothly,” Austin said. “There is no natural explanation that fits.”

The birth mother never held or looked at the baby, who was rushed into another room.

There was also the $20,000 cost of the adoption to contend with, but then came the next miracle.

Austin is a pastor at St. Rose Comm 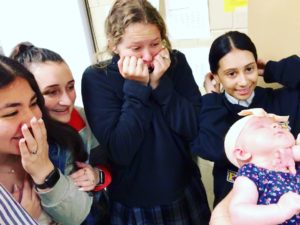 Family and friends also donated. The couple also got a Gift of Adoption grant, as well as used their savings to cover the cost. They made their last payment on Monday.

“We’re just so delighted and happy at this stage of our lives. Addie has turned our world around,” Austin said. “I love my wife and now I’ve got another reason to go home. We’re excited about being the best mom and dad we can be.”

Part of that job will entail them explaining to their daughter that she is adopted. They want Addie to know her birth mom was courageous and loving, and even consider her a hero. They will have adoption parties so she’ll know she’s loved as much as any natural born child.

“We feel like we could not have asked for a better daughter,” he said. “We have so many people in our family and church who come here and love on her. It takes a village.” 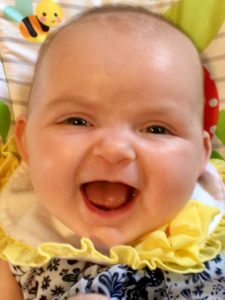 And they have one.

But, even with this joy, came still another miracle.

“People say she looks like us,” Austin said. “We certainly feel like the Lord worked things out for us. Everything worked out.”

310 COVID-19 cases in St. Charles Parish as of Tuesday afternoon

As of Tuesday afternoon, St. Charles Parish has reported a total of 310 cases of COVID-19 according to the Louisiana Department of Health. […]

Police in South Carolina recently utilized DNA evidence to link Ronald Lee Moore, who committed suicide while incarcerated in St. Charles Parish in 2008, to the 1996 murder of a 23-year-old woman in the mid 1990s – the second of two unsolved murder cases in which Moore has had suspected involvement. […]

Elizabeth Gravois’ intuition as a mother may have just saved the life of her 7-week-old daughter Olivia. […]