“We are still exploring the feasibility of a fixed-route system,” said Corey Faucheux, Transit board chairman and St. Charles Parish’s director of Economic Development and Tourism. “I anticipate that within the next six months, we will begin a formal process to solicit input on a potential fixed-route system and its financial viability.”

If viable, the service would step up from its current fee-based service or demand response system to one with specific places at specific times in St. Charles, St. James and Jefferson parishes.

The first route is from St. James Transit via Airline Highway to Ormond Boulevard in Destrehan. It would have eight round trips per day with 32 stops.

The second route would be from Ormond Boulevard to Boutte via U.S. 310, Old Spanish Trail, U.S. Highway 90, Paul Maillard Road, crossing the Mississippi River and to Airport and Williams and 25th. It would include 10 round trips with 22 stops.

Jackson-Martin said they also want to provide bus stops or shelters along the routes.

John Dias, executive director of the United Way of St. Charles, also recently joined the board, told the council the goal is to have a plan with more details in six months. 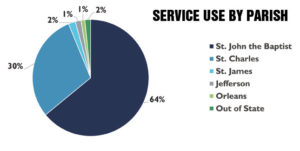 Dias said an on-demand service is difficult for people seeking work transportation to use.

Of the parishes using the system, St. John the Baptist is the biggest user at 64 percent followed by St. Charles at 30 percent and then St. James, Jefferson and Orleans parishes.

Jackson-Martin said 70 percent of use is rural and urban at 30 percent.

When Glenn Deroche got the opportunity to explain how a Social Security scammer conned him out of $15,000, he readily spoke to U.S. Sen. Susan Collins’ office to aid the investigation. […]

When Kyleigh Baudry wanted to try out to be the Hahnville High School mascot during her freshman year, her father had his doubts. Those are long gone, now. […]