In the aftermath of Ida, Pastor Michelle Harris of United Methodist Church in Destrehan sent out a message to the church’s leadership and staff – effectively saying, “this is what we’re here for.”

“The most important thing we need to be doing right now is to help the people in our area in need,” Harris said of what she conveyed that day, the first she and others were permitted to return to the area. “So, every single possible opportunity we’ve had to leverage what little resources we have left at the church at the moment to serve this community, we’ve done it.”

That’s included the recruitment of volunteer help – and outright bolstering of manpower, which was badly needed. Harris helped connect and coordinate more than 150 volunteer workers from out of town with families who needed help cleaning homes and supply distribution efforts.

Through that work and the partnerships that have been formed, the church has been able to serve more than 11,000 hot meals over the past month from the parking lot in front of the church. Another partnership with Anytime Fitness has enabled the latter, which has a severely damaged gym site due to the storm, to offer free exercise classes at the church site, in order to help cope with stress.

These efforts have come despite many with the church being in a tough situation due to the storm themselves – not the least of which Harris, her husband  Jason – pastor of UMC Church in LaPlace, where he is overseeing similar recovery efforts – and their three children, who have been living in a camper since the storm. Every part of UMC has been damaged badly, including the church’s parsonage, which is Harris and her family’s home.

“Our house is not livable,” Harris said. “That story isn’t just mine, but so many of our church members who have lost so much yet continue to work really hard to serve those suffering in St. Charles Parish.”

Harris said the parking lot of the church has been open for utilization for things like supply distribution events, while others have been able to check in for something as simple as a shower and a place to sit down and eat. 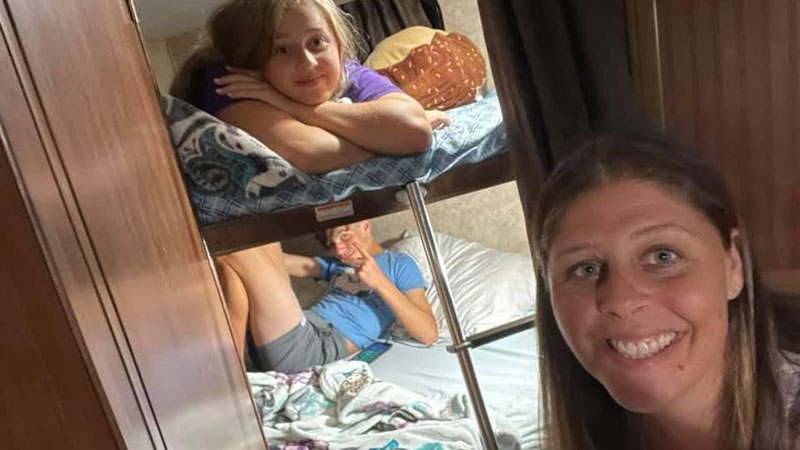 UMC, which partners with the Matthew 25:35 Food Pantry to feed the hungry, got to work quickly. But the recruitment from outside the parish began, Harris said, because so many volunteers were indeed suffering with their own troublesome situations at home.

“The first time Matthew 25:35 did one (a distribution event), it was so hard because all of the volunteers were dealing with so much,” Harris said. “Power wasn’t even restored to the area at that time, so that’s what kind of inspired me to start making calls and recruiting people from outside the parish.”

The response was overwhelming, she said – so many were more than willing to make a difference.

“So many different groups we’ve coordinated with to come in and serve meals … I’m so thankful,” she said. “The same for the work teams that have been able to come through the past few weeks. We found places they could go and help people in the community. You’ve had dozens of trucks from all over … Louisiana, Mississippi, Georgia, Florida, bringing in supplies like tarps, garbage bags, rakes, cleaning supplies … any way I was able to help coordinate with them, and it was very rewarding to see people get the things they needed.”

Part of what made the work rewarding, Harris said, was knowing what it was like to be in the shoes of those affected by the storm.

“When you know you’re going home to the same kind of thing, even being able to help someone else out a little in their situation presents a little bit of a bright spot,” Harris said. “It’s a chance to step outside of your own struggles and help others.”

That said, it hasn’t been an easy time. Harris said the camper tends to be a bit cramped for the family of five – plus their two dogs. Through it all, Harris herself suffered a hernia and needed surgery for that.

“It’s been one thing after another,” she said. “Last month was absolutely insane. I have no idea when we’ll be back in our house … they still haven’t been able to start repairs, and insurance hasn’t been very cooperative … the kids are troopers. They’ve been incredible. But I think we’re all so ready for normalcy, like everyone else is.”

One message she wants to get out to the community in all of this is that the church is here for anyone who needs it – and sometimes, all that is needed is a little direction before springing into action.

“We’re completely committed to helping as we go on,” Harris said. “I know a lot of people who were helping in emergency relief had to leave town. Things are starting to get back out of crisis mode, but we’re sticking through the long haul. And we want to know about the needs of the community so we can help in any way we can. When people reach out and contact us to let us know about ways to help, it’s such a huge help for us to do just that.”

As cleanup efforts continue around St. Charles Parish, officials recently announced Dec. 5 will serve as the deadline for all residents to put debris out for collection. […]

A two-vehicle crash that occurred shortly after midnight this morning on LA Hwy 20 in Chackbay claimed the lives of three Hahnville High School class of 2021 graduates – Michaila Bowling of Luling, Hali Coss of Luling and Lily Dufrene of Luling. […]

Hali Coss, 18, a native of Ohio and resident of Luling, LA, passed away on Saturday, November 20, 2021. Visitation will be held at Holy Family Catholic Church, in Luling, on Friday, November 26th from […]