With federal dollars available that could cover an estimated half of the long-sought Baton Rouge – New Orleans passenger rail service, the Southern Rail Commission (SRC) is hiring a consultant to identify ways to pay for upgrades like replacing the Bonnet Carre’ Spillway Bridge to help advance the project.

“All the studies done we know of say the Bonnet Carre’ will have to be replaced,” said John Spain, executive vice president of the Baton Rouge Area Foundation.

The bridge replacement is one of several infrastructure improvements necessary to move on the rail, but it’s the single largest of them proposed.

The aged bridge, which runs through St. Charles Parish, can accommodate traffic at 10 mph, which has also stalled growing freight traffic on the rail line. With the proposed rail service, a bridge would be needed capable of supporting 80 mph traffic. It would cost $60 million to replace the bridge, which is owned Kansas City Southern. 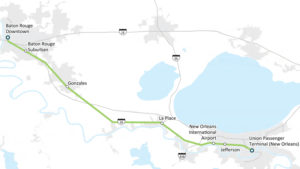 Though it’s been in the works for nearly 10 years, Spain is more optimistic it can be done with recent developments.

“We think it’s probably closer now than it has been at other times because Gov. John Bel Edwards supports it,” he said.

Also, federal money available for the inter-city rail also points to a timely push for the project.

With project funds in hand, he said passenger rail could be initiated in some form as soon as two to three years.

Overall, the rail system is expected to cost around $300 million, which he estimated could be covered by at least half federal and half state dollars.

“There are in fact more funds available now for the inter-city rail than ever before,” he said.

Hiring a consultant, even on a part-time basis, in the coming weeks is an indicator the state is closer to making it a reality, Spain said.

Connecting the state’s two largest urban areas – New Orleans and Baton Rouge – is significant for the state economically, he said.

“We know there are daily, literally thousands of people who commute between those two cities,” Spain said. “As you look at the ever increasing amount of traffic on I-10, having alternatives to move people makes sense.”

The figure is 48,000 commuters daily between the two metro areas.

Referred to as the “workers train,” Spain said some have asked how it could benefit St. Charles Parish’s growth in plant expansions.

“When you look at the massive construction underway there are thousands of workers at the new and expanding facilities, particularly in St. Charles Parish,” he said. “They could take the train, get off at a stop to a shuttle bus that could take them to those job sites.”

Additionally, the train would provide Wi-Fi, dining facilities and a stop at the airport, which Spain said would provide efficiencies for workers.

Family and friends of Hali Coss, Lily Dufrene and Michaila Bowling are in the process of planning The Hali, Lily and Michaila Memorial Golf Tournament. […]

One year later: A look back at the recovery of St. Charles Parish

Battle for the Paddle returns Thursday