The recently recognized Bonnet Carre’ Spillway as a national historic landmark is only the beginning of the area’s significance as one of St. Charles Parish’s hidden jewels.

Sprawling over more than 7,000 acres, this area of Norco abounds with such outdoor opportunities that it serves as a one-stop recreational haven. Its centerpiece is the spillway, designated as a Historic Civil Landmark by the American Society of Civil Engineers on Dec. 13.

The Historic Civil Engineering Landmark Program has recognized more than 200 projects around the world. In Louisiana, the spillway is the fifth project with this recognition. The spillway was constructed between 1929 and 1931 in response to the Great Mississippi Flood of 1927. State-of-the-art design was used at that time for foundations, concrete materials and hydraulic modeling. 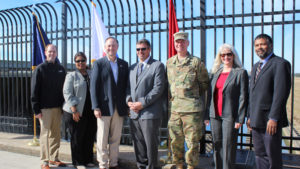 “We’ve always viewed the structure, as not only as an interesting piece of engineering architecture, but a real functional thing developed almost a century ago,” said Chris Brantley, project manager of the spillway.

Brantley added, “We call it standing the test of time.”

The spillway is the southernmost floodway in the Mississippi River and Tributaries Project (MR&T), and provides extensive outdoor recreational opportunities in the area.

A full array of activities attracts nearly 350,000 visitors a year.

The location is part of a sprawling complex in St. Charles Parish managed by the U.S. Army Corps of Engineers, and it’s much appreciated by the people who frequent its many recreational features.

When the spillway is opened, the flowing waters of the river also draw them to abundant resources like fish and crawfish.

Brantley said many of them come for the activities, including fishing, crawfish, hunting, dog training, camping and wildlife watching. More specialized activities include ATV and motorcycle riding areas and a retriever dog field.

Horse riding is among the area’s growing activities, he said.

The RC Recreational Area – Bleakley Airfield is an important location for model flyers in the Spillway RC (remote control) Club who rely on it for their hobby.

A waterway nearby is called the “Upper Borrow Canal,” because the land was “borrowed” through dredging and created the body of water, he said.

Nearby, in what residents call the “Suction Dredge,” visitors can go crabbing. 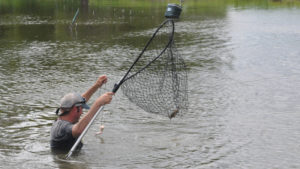 The spillway also offers a 5.5-mile loop trail near LaPlace used for hiking, walking and mountain biking. Dogs are also able to use this trail.

Harris Dufrene III spoke with a tear in his eye.

St. Charles Parish natives Daina Baird and Michael Weber were eager to take a quick, surprise weekend trip with intent on finding relaxation and letting some stress drift away – but that was, by any measure, not to be. […]