Ted Legendre is fighting city hall, calling the St. John the Baptist Parish Council “antiquated” in it categorizing his tattoo shop as an adult business and prohibiting him from reopening at his new location.

“This is a family-oriented place,” the Paradis native said he told the council on June 22. Legendre hoped for a re-vote that would allow him to open at his new location, but instead he said, “They shot me down.”

Legendre’s July 2 Facebook post added, “St. John council has effectively shut us down. If you want us back speak up and call your councilman. They have designated us as a sex shop/adult industry. Pass this on and have your neighbors complain to their councilman.”

His appeal generated more than 8,000 followers, who responded they’d only seen tattooing and piercing there, not anything that resembled it being a “sex shop” or having pornography. They also questioned the parish interfering with business.

Legendre was midway in moving Tattoos Unlimited from U.S. 51 to a location in a strip mall on West Airline Highway when the parish changed its zoning rules that classified the tattoo parlor as an adult store. He said this was done even though the parish had already approved renovating the space.

The new law banned any “adult use” businesses on the east bank of the parish. They are defined as adult cabaret, adult media store, sex shop, adult theater and tattoo parlor.

“I don’t feel no more,” Legendre said. “I’m just numb until I get this settled. I know what I’ve got to do, I just don’t have the funds to do it. I can get the Gofundme and go to my last resort – hire a lawyer and see what happens.”

Despite his business having operated 30 years at its original location, the store is stalled and so is Legendre.

Burdened with the cost of a store he can’t operate, the 58-year-old business owner was forced to move back in with his parents in Luling. He’s holding onto this store in hopes of getting the council to reclassify it so he can reopen in LaPlace.

The move is contrary to a man who has been more of an artist than a fighter, even though he served 13 years as a deputy and later a narcotics detective with the St. Charles Parish Sheriff’s Office.

In the 1990s, Legendre had been assigned to observe Deadeye Tattoo Studio on Paul Maillard Road in Luling. Instead of finding drugs, he found the store was owned by an old high school buddy.

“I started hanging with him a little bit.” he said. “When the guy who worked with him quit, he asked me if I’d be interested in learning how to do tattoos. I said, ‘Sure.’ I’d been drawing all my life. They were all up and up.”

By 2002, Legendre started working as a tattoo artist, working at different parlors that led to Tattoos Unlimited in LaPlace. Three years ago, he bought the shop. Last year, he decided it was time to grow. 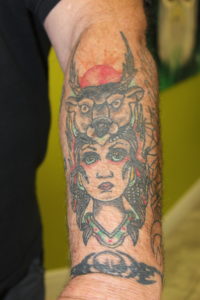 “I wanted to get a bigger client base,” he said. “I had four artists working at the shop.”

Legendre also wanted higher visibility, which is why he chose the strip mall location. He got his utility permits and started remodeling and then he was recently notified by the parish’s zoning department that they were denying his business license because of his shop’s new classification as an adult business.

He immediately questioned lumping his business with sex stores instead of arts and entertainment, as well as equating the move to violating free speech.

He maintains the law allows a bar to be closer to a day care center than his parlor, arguing the law is inconsistent and unfair.

“They made the restriction so stringent there is no way I can reopen my shop in LaPlace,” Legendre said.

The council advised he relocate to the parish’s business district or Reserve, which he said is totally contrary to why he moved in the first place. 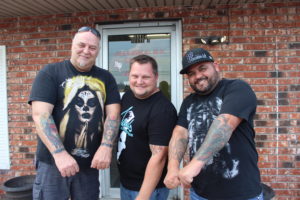 In the meantime, Legendre said he’s giving a shout out to Mike Hernandez, who will soon let he and his artists work out of his shop in Boutte called Precision Ink. For Legendre, he hopes it will provide time to organize his challenge against the St. John council’s decision.

“They don’t know they’ve done anything wrong,” he said. “Nobody ever fought them before. I’m gonna.”