Two indicted on second-degree murder charges for allegedly selling heroin to a Luling man who died from an overdose earlier this year were just another addition to an already growing opioid abuse problem for St. Charles Parish.

Michael “Slim” Willis and Julie Raffray were indicted in New Orleans on June 8, facing numerous criminal counts, but also charged in connection with Branden Pelot’s death. They are accused of running a heroin network with Willis as its leader.

Pelot’s death is the latest of many being reported in a national opioid crisis, which has been defined as the misuse of such drugs as prescription pain relievers, heroin and synthetic opioids such as fentanyl. The Centers for Disease Control and Prevention estimates the total “economic burden” of prescription opioid misuse alone in the U.S. is $78.5 billion a year. This includes healthcare costs, lost productivity, addiction treatment and criminal justice involvement.

It’s hitting on epidemic levels in major metropolitan areas, but the problem is escalating just about everywhere in overdoses and arrests.

To date, there has been one opioid-related overdose death this year, according to Sheriff Greg Champagne. Last year, there was none. 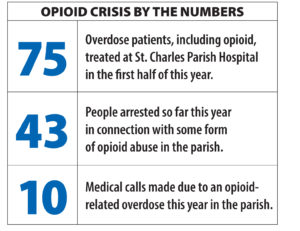 This year, there have been 43 people booked in connection with possession of some form of opioid.

Of the 16 medical calls made due to a narcotic overdose this year, 10 of them were from some form of opioid-related medical emergency, according to the sheriff. Last year, the total was 18 with an apparent 14 of them related to opioids.

“I believe the reason for the rise in the overdoses thus far in 2018 is due to the increased amount of heroin being laced with fentanyl in the Louisiana area,” Champagne said.

Fentanyl is also a synthetic pain medication, reportedly 50 to 100 times more potent than morphine, used as an anesthesia.

But it’s also being used illegally as a recreational drug typically mixed with heroin or cocaine and sold as one of the strongest opiate drugs on the market.

Champagne is calling for tighter enforcement of the nation’s border with Mexico to control it entering the U.S.

“It is no secret that nearly all of the heroin and fentanyl coming into the United States is coming from Mexico,” he said.

Tighter supervision over opioid prescriptions for medicinal use is helping, he said.

Pharmaceutical companies have been blamed for false assurances dating back to the late 1990s that patients would not become addicted to these opioid pain relievers, which lent to healthcare providers prescribing them at greater rates. According to the CDC, the abuse became so widespread that 33,000 opioid overdoses were reported in 2015 and the deaths have continued growing.

“This is a national and international problem and, sadly, the local response in any city, county or parish is limited from a law enforcement standpoint,” he said.

“We need to stop telling everyone who becomes addicted that it is a ‘disease’ and ‘not their fault.’” – Sheriff Greg Champagne

The hospital uses Naloxone, a drug that reverses or blocks effects of opioid medication, and is used in emergency rooms to treat a narcotic overdose in an emergency, according to Dr. Marc Labat, the hospital’s emergency department director and chief of staff.

But Ochsner, which manages St. Charles Parish Hospital, says it’s addressing the problem on many levels.

“All Ochsner facilities are working together to combat the opioid epidemic through education and comprehensive pain management programs,” according to a statement from Ochsner.

Emphasizing that misuse of and addiction to opioids, including prescription pain relievers and heroin, is lending to the national health crisis, an estimated 115 people die a day in the U.S. from overdoses.

Additionally, Ochsner pointed out views are changing about the long-term effectiveness of these drugs for pain.

“Prescription pain relievers are not only proven to be highly addictive, but are shown not to be effective for long-term management of chronic pain, resulting in decreased quality of life and employment and increased utilization of healthcare.”

Ochsner Health System has developed a proactive approach to combatting this epidemic.

Educating patients and healthcare providers, along with improving access to comprehensive pain management programs, are key to becoming a part of the solution.

Ochsner’s Opioid Stewardship Program is a task force comprised of multiple departments across the system with the goal of improving efficiencies that may have contributed to the nationwide opioid crisis, treating patients who already suffer from opioid dependency and implementing better treatment options for those suffering from chronic pain.

Overall, Champagne agreed with the need for increased availability of treatment, but remained critical of those who choose such drugs for recreational use.

“I also believe that while some who become addicted do fall into it as a result of the cycle of pain and prescriptions, many simply make the reckless decision to experiment with opioids for the thrill of it despite the obvious warnings and evidence that it causes death and misery,” he said. “We need to stop telling everyone who becomes addicted that it is a ‘disease’ and ‘not their fault.’ We are removing the personal responsibility for our own actions and, in my opinion, this is counterproductive.”

Teacher’s legacy lives on through foundation established to help others

Ashley Bennett DeJean’s tribe of family and friends is making sure her life is not forgotten, and their work has most recently reached out to families facing serious areas of lack in the aftermath of Hurricane Ida. […]

Ida cost many St. Charles Parish residents their homes. If not that, they went without power, internet, water and readily available food for an extended time, and in many cases their belongings were destroyed Schools were closed. […]