Thanks to the New Orleans Pelicans, a longtime place to play basketball in Norco seems brand new again.

The NBA team funded a complete refurbishing of the Bethune Park outdoor basketball court located off of Washington and Kathy streets after an application by St. Charles Parish’s Parks and Recreation Department was chosen.

“They’ve been offering the program for nine years and we’ve submitted an application each time. This time we won,” said Parks and Recreation Director Duane Foret. “It’s terrific. We’ve got so many kids who love playing basketball and many who love to play outdoors. It’s a great addition to the community of Norco and St. Charles Parish. Anyone can go play on that court … we’re excited about it.”

The renovations included repairing cracks in the court and overlaying it with cement to make it level and smooth — Foret said the court was chosen, in part, because it had become unlevel. Then the court was painted red, gray and blue, matching the Pelican team colors, and the Pelicans logo placed at midcourt.

The repairs, Foret said, likely cost between $15,000 and $20,000. He credited Sen. Gary Smith with playing a large part in the successful application process.

“They took care of the whole, full-sized court,” Foret said. “We’ve been one of the few departments in the state fortunate enough to take advantage of the program they offer, and it’s made a huge impact.”

An official ribbon cutting was held on March 27, with 70 students from Norco Elementary on hand to be the first to enjoy playing on the new court. 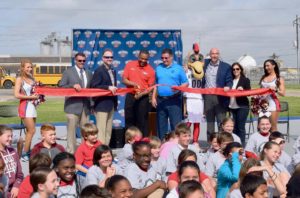 In addition, the Parks and Recreation Department purchased two new basketball goals for the court that were officially installed, replacing goals that had become old and worn.

“The Pelicans had some people out to do some drills and shoot some baskets with the kids,” Foret said. “It was a really nice event.”

Foret said he plans to submit another application by the next deadline of April 30, and if St. Charles is fortunate enough to make it two in a row, another court in need of refurbishing will get the NBA’s magic touch.

Lorraine Borne Delk, a native of Vacherie and resident of Hahnville, passed away peacefully on May 10, 2020. She was 67 years old. A private Mass of Christian Burial was held on Wednesday, May 13, […]

Suspects are innocent until proved guilty in a court of law. Arrests Mac Farrell Jr., 32, of 424 Church St. in Raceland, was arrested April 25 and charged with domestic abuse – child endangerment. Terranie […]

St. Charles Parish, along with state, set to reopen this week

St. Charles Parish, along with the rest of Louisiana, will begin the process of reopening businesses Friday. The move comes after nearly two months of Gov. John Bel Edwards’ Stay-at-Home Order that closed a wide range of businesses. […]