The New Orleans Saints and their home region have forged a bond like few others. Destrehan’s Pete Carmichael Jr. understands it in a way few others can, the Saints offensive coordinator and St. Charles Parish resident experiencing all of the team’s peaks and valleys from a central role since 2006.

Carmichael and his family moved from San Diego to Destrehan in 2006, joining the newly assembled staff of head coach Sean Payton, who at the time had just been hired to oversee the rebuilding of a Saints’ team that had been ravaged by Hurricane Katrina, just as its city had been.

Of course, that season the Saints enjoyed a “worst to first” jump in the NFC South, going 10-6 and winning the division’s championship a year after posting a 3-13 mark. The Saints won their first playoff game in six years before ultimately bowing out in the NFC Championship Game.

“It was a very, very memorable season,” said Carmichael, who was the team’s quarterbacks coach at the time. “The fanbase, I mean, you could just feel their love and passion for this team. The city and team embraced each other, and we were really all unified as one.”

It would not be anywhere close to the last memorable moment Carmichael, now 47, would spend as part of that symbiotic relationship between fanbase and team. He was promoted to offensive coordinator in 2009, when the Saints captured the first Super Bowl crown in the franchise’s history. He helped captain one of the most prolific offenses in NFL history in 2011. He’s suffered through the most crushing defeats as well, like the Minneapolis Miracle in 2018 and the blown call to cost the team a Super Bowl berth against the L.A. Rams this past January.

That’s the kind of run with one team that’s rare in the NFL coaching profession: just to spend 13 seasons with one team is an experience not shared by many in the pro ranks. So much so that with 10 seasons under his belt in his current role, he’s — by a longshot — the NFL’s longest tenured offensive coordinator.

“I’ve been very fortunate,” Carmichael said. “Obviously, it starts with our ownership. Mr. Benson was so great and Mrs. Benson has been carrying that on. Mickey Loomis is outstanding, and obviously working with Sean is just awesome. All those people have paved the way for me to be around this long.”

From a personal standpoint, it’s as refreshing as it is on a professional level, he said.

“I have two kids who have made it through the whole school system here,” Carmichael said. “That doesn’t happen (for an NFL coach).”

Carmichael’s passion for coaching is something passed down from his late father, who coached for 40 years at the pro, college and high school levels, including time with Boston College, Pittsburgh and Louisiana Tech at the college level and with the Jacksonville Jaguars, Cleveland Browns and Chicago Bears in the NFL.

“It was something I enjoyed being around,” Carmichael said. “Practices, gameday, I was always around it.”

“You spend the long hours because you don’t want to let the next guy down. But it’s worth it. We have a special group.”- Pete Carmichael Jr.

Carmichael played football and baseball as a prep athlete. He chose to stick with baseball when he moved on to the next level, playing second base and in the outfield at Boston College.

“But I always knew, one day, I wanted to go back to football,” Carmichael said. “That passion my dad had for it, how he loved being around his players … it was like, ‘Oh man, I wanna do that some day.’”

Carmichael started his career as an assistant coach, first volunteering for a year at New Hampshire and then getting on with Louisiana Tech at the NCAA level, before earning tenures with the Cleveland Browns, Washington Redskins and San Diego Chargers in the NFL.

He spent 2002 to 2005 with the Chargers, and that’s when he began working with Drew Brees.

Yes, Carmichael’s league-longest tenure as offensive coordinator is actually surpassed by the time he’s spent with his current quarterback. Carmichael has worked with Brees for all but one year of the latter’s career, the veteran passer’s rookie year.

“Everything you read about him and hear about him … it’s 100 percent true. The consummate professional,” Carmichael said. “I’ve learned a ton from Drew … he’s been a great teacher for me as well. I’m lucky to be a part of his career.”

He calls the 2009 Super Bowl season the most memorable time of his career. The 2011 record-shattering offense was another special time, a season the Saints broke the league record for yardage gained.

On the other side of things, the bitter end to the Saints’ most recent season is one that he’s moved on from, but that won’t be forgotten.

“It takes a while to get over. We have a group of professionals here, and Sean’s a great leader. We’re all ready for the 2019 season to get started,” Carmichael said.

History says it’ll be another largely productive one. The Saints have been a fixture in the top five of the league’s offensive numbers throughout his tenure. Brees is the NFL’s All-Time passing leader. These things cannot happen without evolving and finding ways to stay ahead of the offensive curve.

And that, Carmichael says, is half the fun.

“That’s part of why we love doing this,” Carmichael said. “We have an amazing staff where we all enjoy working with one another. There are no egos, we all are there with a common purpose. And we’re friends outside the building as well.

“You spend the long hours because you don’t want to let the next guy down. But it’s worth it. We have a special group.” 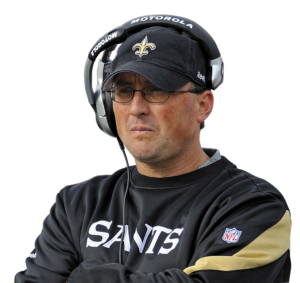 Michael LeRoy Stillinger passed away on Sunday morning, October 18, 2020 after a lengthy illness. He was the only son of Reva Michaels and Ralph Stillinger who preceded him in death. He is survived by […]

Hahnville fell to a strong Mount Carmel team Tuesday, but the Tigers are still off to a strong start to 2020 with a 7-4 record thus far. […]

Rivals Hahnville, East St. John to lock up in Reserve

Hahnville prepares to roll down Airline Highway and into Reserve to face a longtime rival this Friday night, as River Parish rival East St. John welcomes the Tigers to town for a District 7-5A showdown. […]

by Gulf Engine & Equipment - 1 month ago