Samuel Canyon recalled a Canadian once told him he couldn’t be Navajo because the Americans killed all of them.

It’s one of the misconceptions about these native Americans that he and his wife, Tasha, as well as their five children, are happy to set straight.

“As of 2016, my tribe had over 350,000 as the biggest tribe with the biggest reservation about the size of West Virginia,” he added. “We’re the Navajo nation.”

The Canyons have been residents of Luling since mid-August. Samuel, who relocated his family to accept a job as a radiation protection technician at Waterford III, said it’s been a good move with great food and people.

They came from Utah, which Tasha described as exciting and kind of scary.

“It’s definitely different than Utah,” she said of the landscape and line of sight. “You can see everything there. In Louisiana, you see trees and the weather is different.”

Even so, Tasha said they have a motto of “Bloom where you’re planted,” and they’re doing just that in finding their rhythm with the school system and making new friends. They even made a presentation abou 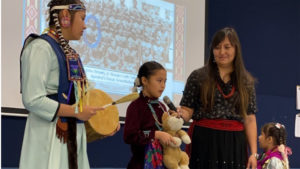 t being Navajo at Lakewood Elementary School, which they considered a welcome opportunity to address some misconceptions about being Navajo, as well as Native American.

“Your culture is not really well understood and, because of that, you’ll always feel a little out of place,” Samuel said. “But, at the same time, there is a deep gratitude for the gifts left me. I’m grateful they preserved the land for us.”

No. 1 is Navajos are a living people, not a historical reference to a people who once lived, Samuel said.

“They talked about us like we were gone,” he said. “We have to stop being looked at like we’re a historical fragment. People need to realize we’re here, a part of society and not savages.”

Not all Native Americans are the same or in one tribe. Tasha clarified there are 573 federally recognized tribes (15 in Louisiana).

“Every tribe is unique and different,” she said. “We all have our clothes, dwellings, creation stories, own foods, and traditional ways and ceremonies.”

Samuel added, “They think of the plains Indians with head dresses and horses, but the Navajo nation is much bigger. The images in media are also different than we really are. We’re not showy or disrespectful. We’re not savage or get on a horse and chase buffalo, but the narrative has depicted us as wild, savage and uncivilized – that is a farce. We have rules of social conduct, different than other people would think and it’s different for every individual tribe.”

Their names were changed, too.

The indigenous Navajo name was one name (no first and surname), such as Tasha’s great grandmother’s name was “Kenasbah,” but her father’s last name became Baldwin. The post office assigned names because they couldn’t pronounce the Native American ones. This is how their last name became Canyon, which came from Samuel’s family living near the Grand Canyon.

Despite the lingering perception that they get “free money” as a recognized tribe, both Samuel and Tasha say they get none. This relied on each tribe’s agreement with the federal government, and their tribe had no such agreement. In fact, the Navajo nation leases its land from the federal government and, although it’s at a low cost, Tasha said they don’t own the land and have no land to pass on to their children with the nation.

Until recent efforts to preserve their language and culture, Samuel said it was fast disappearing as generations were forbidden from speaking it as part of an effort to generate a western-minded culture. Now, children on Navajo reservations can read books with Star Wars and Finding Nemo in Navajo, as well as are taught the prayers and songs.

“We’re seeing a huge return to the Navajo language,” Samuel said. “The old ways, like bow making and pottery, were lost and now we’re seeing people attempting to save these parts and pass them on.

“It’s who I am and it’s my children after me,” he continued. “Being Navajo was a gift given to me by my parents and one I give to my children. We’re trying to teach our children so they can pass it down. Today, there is a homogenization of culture ,and to me it’s really sad we’re losing the variety that makes us special and who we are.”

For Tasha, being Native American means being connected to the land everywhere she goes.

“For us, things that bring life and sustain life, like the river and swamps, are sacred to us,” she said. “I just soak it up and say a prayer of thanks giving and bringing good feelings to this area.”

She wants to instill this same connection to the land for her children, as well as the Navajo teachings and achievements like being among the military’s code talkers. There were nearly 500 Native Americans in the military who used native American languages, including Navajo, to transmit secret tactical messages in World War II.

“Our language saved our country … the very thing they wanted to take from us,” she said. “I’m using my voice to tell them these things, too, so they know who we are. When you know who you are you’re unstoppable and it helps you make decisions for your future. I always tell my kids you came from people who survived. They survived the ‘long walk’ so they could live so you could be here today.”

Samuel added, “We’ve been around a long time and we’ll continue to thrive and grow – that is what we do. The Navajo people are flourishing and will continue to flourish.”

Lee, along with fellow rushers Trey Nixon, Patrick LeBranch and Brandon Freeman, controlled the offensive flow on the ground, particularly in the timed quarter portion of a scrimmage that also involved sets with a pre-determined number of plays between the first and second teams for each squad.   […]

The Rotary Club of St. Charles Parish announced this week that the 2021 Alligator Festival is cancelled due to parish-wide devastation from Hurricane Ida and continued difficulties surrounding the COVID-19 pandemic. The festival was scheduled […]

Suspects are innocent until proved guilty in a court of law. Arrests • Claire Lusk, 18, of 131 Calendar Street in New Orleans, was arrested Aug. 16 and charged with unauthorized entry of an inhabited […]