It’s a story that has touched hearts, amazed viewers and went viral.

When Matthew “Pork Chop” Sylve took his first awkward, unaided steps that were filmed by a bystander at Anytime Fitness in Houma, they weren’t supposed to happen. But they did, and the video of them that aired on the gym’s Facebook page drew more than 77,000 views, 305 comments and over 700 shares.

“I walked the whole mat with nothing,” Sylve said proudly of his independent steps. “It was like a miracle.”

Jennifer Perkins of Luling, co-owner of the gym with her brother, Andrew Blackwell of Destrehan, said it was amazing and they were proud to be a part of helping Sylve in his journey to recovery. They own this gym along with two others in Luling and Raceland.

“It’s just amazing and we’re proud to be a part of it … to be able to support him and help him,” Perkins said. “He literally said, ‘I feel strong today and I’m going to try to walk’ – and he did it.” 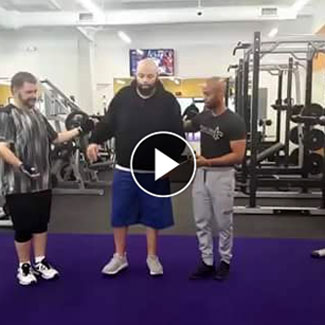 re astounded by the sight of Sylve taking his first steps without assistance – per his insistence – at the gym. Doctors told him the stroke that disabled him on Feb. 9, 2016 would disable his life, too. He was told he’d never walk unaided, but he was determined to change the diagnosis even though his insurer discontinued his physical therapy saying it wouldn’t help him.

Just two months after being provided a membership at Anytime Fitness, Sylve sensed it was time to make his move.

Because of this diagnosis, his insurer stopped covering physical therapy nearly two months ago and he couldn’t afford continuing it being out of work. But the man wasn’t ready to accept the diagnosis and found Anytime Fitness, which provided him a membership.

Determination, hard work and an intense love for his family drove him to change his life in a way that he said he had to do so he could live longer for his wife and two daughters.

Before his stroke, Sylve threaded pipe at Benoit Machine in Houma. He and his family had already known hardship, having relocated to the area after Hurricane Katrina took everything they had in Plaquemines Parish.

“Katrina took everything from us,” he said. “We had to start over.”

When he came to Anytime Fitness, Perkins said Sylve was strong willed and would not take “no” for an answer. He was determined to continue his therapy to work out and get strong so he could stay healthy.

They’re modifying his workouts where he can also workout from his wheelchair to he can continue getting out of it, she said.

Perkins said she’s shocked over the response to the video. He her favorite part of the video is where he says, “Don’t touch me,” so he could continue walking independently. She called him incredible.

The video was taken by a member who sent it to Anytime Fitness to inspire other people.

“Man, I had 70,000 views,” Sylve said of the video. “I was overwhelmed by the people who shared it. I inspired people in a wheel chair that they can do better.”

While the 2019-20 school year came to a sudden and unexpected halt, the St. Charles Parish public school district is making plans to ensure students and teachers enter 2020-21 with momentum. […]

Joseph Weber entered peacefully into his eternal rest on June 29, 2020 at his home in Killona, Louisiana surrounded by his loving family. He was born February 1, 1943 to the late Samson and Josephine […]

She got to school at 6 a.m. and didn’t leave until 7 p.m. Even more remarkable is the fact that, even if the times varied slightly, she attended every day. […]