The second graders at Mimosa Park Elementary screamed in excitement as their hard work was recognized and rewarded in a way that’s been scarce over the past two years.

The students recently got to eat pizza, listen to music and shoot baskets at an after-school celebration of a very special accomplishment: they qualified for the “Final Four” in the New Orleans area in the “Read to the Final Four” literary challenge competition.

In anticipation of the 2022 Men’s Final Four, second and third graders from elementary schools across Greater New Orleans have been logging their reading time, with weekly winners having been announced since January. The top schools were announced following the reveal of the March Madness bracket, with the Top 68 schools, the Top 64 schools, the Top 32 schools and so forth moving on to the next round until the Final Four schools were identified as the reading champions.

During each week of the competition, the top schools are awarded prizes and books. At the conclusion of the challenge, the Final Four schools are awarded a trophy and a monetary donation to their school for books, and each student receives a gift bag – rewards the eager readers at Mimosa Park locked down. 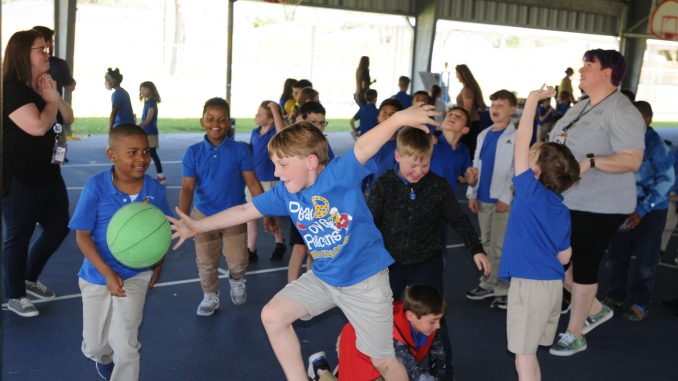 Local college basketball players from UNO and Tulane – including former Destrehan and star and Baylor star and current member of the Green Wave Moon Ursin – were on hand to celebrate and play a little ball with the students.

“It’s just a little celebration to say thank you for all you’ve done,” said Mimosa Park Principal Angi Butler, gesturing toward the students. “Our teachers made a big impact, encouraging them to read and reminding them of when the due date is. Mrs. (Natalie) Campo was a huge factor in ensuring our kids had the opportunity to get their books in and their reading done … it was a lot of fun, a lot of rah rah, and I’m so proud of all of these students.”

Of course, this was an event Butler could appreciate on several levels. The former Destrehan High School girls basketball coach – with Ursin leading the way on the floor -guided the Wildcats to the only state basketball championship in the program’s history, capping an undefeated season.

The event re-ignited that competitive side of her.

“Can’t take an L. I was their biggest cheerleader,” Butler said. “We paraded them through my office, showed them my basketball stuff. You want to show them the correlation between the two, putting the academics into the athletics, and what goes into reading and becoming academically solid so you can play sports.”

Seeing the students all together and celebrating freely was also a reward for Butler and the school faculty.

“These are our COVID babies … they haven’t had the chance to really experience something like this, ever,” Butler said. “So, to have this event, I think they deserve it and it’ll be something they truly appreciate and remember moving forward.”

Ursin said it was fun to be back at the side of her former coach and to be around the students.

“The thing about it is, I told her, ‘You’ll never be able to get rid of me now,’” Ursin joked. “Just to be back home, with her and in this kind of atmosphere is really great. These kids deserve to know what they did was an accomplishment and to be able to celebrate that.”

Campo, the school’s librarian, said the students clearly had their eye on the prize, and once they saw the finish line, they only worked that much harder.

“They were getting more into it, turning in those reading logs … it’s been amazing to see,” Campo said.

“Reading plays such an integral role in the education of our children. For it to be reinforced by UNO and the New Orleans Sports Foundation, it’s a credit to them, but it also reinforces the value of reading for our kids. I’m very proud of Mimosa Park and these second-grade kids,” Oertling said. 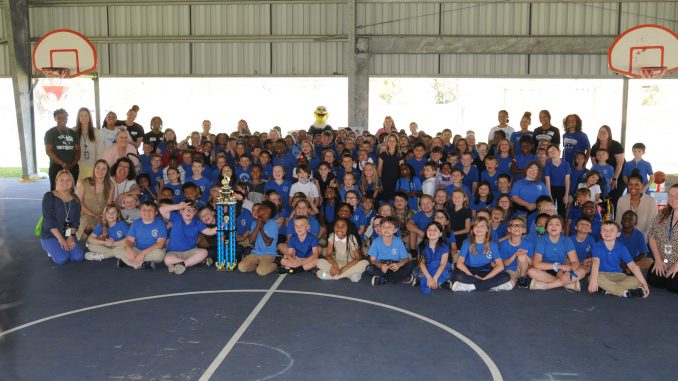