After years of collecting, he has to start over

Cain’s love for the holiday season became pretty well known within his community, primarily through the ever-growing decorative display he annually put together, along with family and friends, outside his home. Christmas lights, reindeer, and other items of festive cheer adorned his home and the three lots out in front of it, and each year he’s added more and more to the display, which has even included a projector screen showing holiday movies.

“Every year he one-ups himself and tries to do a bit more,” said A.J. Buras, a lifelong friend of Cain’s who considers him a brother. “We always come out to help him and set it up … he’s had people pull over on the side of the road from Seattle, West Virginia, California and take a look. He goes all out and then some more.”

Others in the community would also contribute to the growing display, dropping off their own old decorations on his porch that he’d then incorporate along with the other items he’d spent years collecting.

But this past Christmas stands as the last time his display would be seen, at least as presently built and constructed. The heavy rain that flooded parts of the community in late December destroyed much of what he had purchased and collected over many years, in some ways marking the end of an era.

“Basically, he has to start from scratch,” said Taylor Carroll, Cain’s daughter. “(The rain) managed to flood the back of his house and yard so badly that (the items) were ruined.”

Carroll said that while Cain, 44, made insurance claims on the items, he was told that his house and garage were covered, but not his yard. While some of the items could be repaired, much of it could not be — a “dragon” in his yard was uprooted and broken, with its head later found down the street. In total, the damaged decorations represented thousands of dollars lost.

That is to say the timing was horrific: the Christmas decorations could not be replaced because they were, at the time, decorating his home for Christmas.

“They told him, ‘you have to decorate at your own risk,” said Buras. “I thought that was a pretty tough deal.”

Added Carroll: “My dad’s the most caring, humble man ever … it breaks everyone’s hearts that something he has worked on every year has been ruined.” 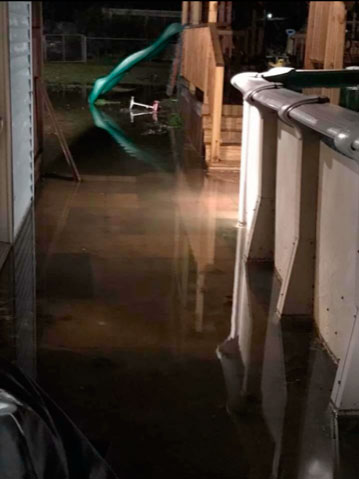 Since the flooding, he’s been able to redo a couple of rooms in his home and is in the process of doing so with his kitchen. As for his Christmas collection, some in the community have donated some Christmas lights to help him restart it anew.

Buras and Carroll decided to try to help Cain rebuild it by creating a GoFundMe page (titled “A Tradition Lost), though they note they did so without telling him of the gesture at first.

“He never asks for help,” Carroll said. “He was just slowly going to build his collection again. I know he’d never ask for a single penny, but we feel if anyone deserves some generosity it’s him.”

Cain extends his holiday spirit beyond his decorations. He dresses as characters annually for the Norco Christmas Parade, having portrayed both ends of the holiday spectrum as Santa Claus and the Grinch. He walks the parade route and gives out – appropriate to both the season and his name — candy canes and takes character pictures with children attending the event.

The yard display, though, has been near and dear to him, and also others judging by positive feedback.

“He was just slowly going to build his collection again. I know he’d never ask for a single penny, but we feel if anyone deserves some generosity it’s him.”
– Taylor Carroll

“People would come by and thank him for doing it … it’s a lot of work, but he really enjoys it,” Buras said. “It makes people happy and that made him happy.”

On a personal level, Buras also wanted to start the fundraiser page as a thank you to a friend he said has positively affected his life in a very large way.

“I’m one of a lot of people who can point to David Cain and say we wouldn’t be where we are today if not for him,” Buras said. “There are so many good things I can say about him, and I’d love to be able to help him out.”

In the days leading up to the landfall of Hurricane Ida, St. Charles Parish Sheriff Greg Champagne had an extremely important decision to make. […]

Amanda Elfer been asked the question many times since Hurricane Ida: “Are you guys coming back?” The truth is, for Elfer and her family, that was never a question at all. St. Rose Tavern was […]

For five softball players, a season is yet to come, and for two volleyball players, their careers on the prep court are behind them. […]