Locals may have taken in an interesting sight near the Hale Boggs Bridge recently – a man flying past it, in fact.

Alas, James Kerns did not grow wings, even if this is 2020. But the Arkansas man and frequent visitor to St. Charles Parish was indeed airborne, paragliding through the sky and enjoying all of the local scenery from a very unique vantage point.

“Sometimes, it’s exhilarating,” said Kerns. “But most of the time, it’s very peaceful.”

A paraglider is a lightweight, foot-launched glider aircraft in which the pilot sits in a harness suspended underneath a large inflatable wing that, as the name would suggest, resembles a parachute. It can be done with or without a motor, which many paragliding pilots use and wear upon their back to provide the launch. Kerns is experienced with both methods, and what he chooses to do depends on the conditions outdoors.

He was here for a work-related trip addressing an outage at the Waterford 3 nuclear plant in Killona. He took off at the field near Ashton Manor in Luling, and a few people stopped to talk to him – not uncommon for someone prepping to take flight.

“Usually, there are people out there walking, and if you need help that’s a good thing,” Kerns said. “A lot of them come by and ask questions about it. Sometimes I end up getting a few new pilots.”

That’s one of the neat aspects of his hobby – more often than not, he has company flying along with him. Many times, he gets to introduce newcomers to the craft.

“Some of them, it’s a new experience. For others, they’ve been flying like me for 30 years,” Kerns said. “I have quite a few pilots who are in their 70s.”

For Kerns, it wasn’t paragliding at first, but handgliding that won his heart. Kerns was introduced to the experience while living in San Diego, California, where his father – and later Kerns himself – was stationed with the Navy. When Kerns was 18, he took up lessons and gave it a shot.

He was hooked, and quickly. 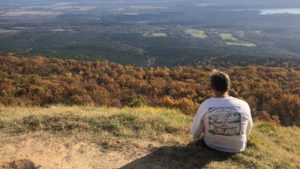 “I think on my second day of lessons, I realized this was definitely for me,” Kerns said. “I spent the day on their glider, and later that day I ordered a glider of my own. I had eight days of lessons and got to fly my own glider on the final day of lessons.”

That was in 1981, and for almost 40 years, he still hasn’t come back down to earth. He transitioned to paragliding as a matter of practicality as he gets older – “that handglider is heavy, about 110 pounds. Coming down on you where you land.” Now, he carries around “a big backpack” containing his paraglider wherever he goes.

“And when you see mountains, or places you can go up, you have it right there,” he said. “It’s really more convenient than the handglider. It’s easy to travel with, even the motor.”

The biggest changes he’s seen in the activity since he began nearly 40 years ago come down to safety. Training is better, equipment is safer, and pilots are certified.

“I’ve been flying for more than 30 years. I’ve had a hard landing once or twice, but never a crash,” Kerns said. “Never broken a bone or been injured … I’m a pretty conservative pilot. What has a lot to do with your safety is what you are willing to do, of course.”

Usually, he stays in flight for anywhere from an hour to two and a half hours – and he’s at peace throughout.

“You’re not thinking about anything else in the world. It’s just you, focused on your flying,” Kerns said.

Katie Bourg’s brain cancer diagnosis has caused significant financial strain on her family – a strain that is a little over $10,000 less of a burden after a Dec. 18 jambalaya fundraiser held by St. Charles Borromeo in Destrehan. […]

Authorities are searching the Mississippi River area near the Hale Boggs Bridge for a person who it is feared potentially jumped from the bridge on Tuesday evening. […]

Dolores Landry Pizzolato passed away peacefully at her home in Luling, LA, on December 23, 2020, she was 83. She joins her loving husband, Thomas S. Pizzolato in heaven. Loving mother of Jan DeJean (Bobby), […]