Taller with curling brunette hair and a Mona Lisa smile, Demi Comardelle is doing well in her fight with an extremely rare condition after complications from the treatment for the same condition claimed the life of her sister, Daelyn.

“She was just always happy,” said her grandmother, Diana Bye, of Daelyn. “She smiled. She laughed. She was aware of everything. She was very loving and lovable. She loved to have her face rubbed. She loved that contact. It was really, really rough on my daughter who was in the room with her.”

Daelyn’s death was a shock, despite her rare condition. She’d been diagnosed with HLH, a genetic mutation that compromises cells, making them overactive and inflammatory. They damage, rather than help, the body’s immune system, and the only known treatment is a bone marrow transplant.

The 11-month-old did well with the prep before the transplant, but did have an extremely bad case of mucositis – a painful inflammation and ulceration of the mucous membranes that line the digestive track.

Daelyn’s cells came in rather fast resulting in early engraftment syndrome that causes “leaky” blood vessels resulting in extra fluid, including the fluid she already had from the extra fluids she was getting for nutrition.

This landed Daelyn on a ventilator.

Somehow, her tube moved out of place from the ventilator which caused Daelyn’s lungs to collapse, according to Bye. 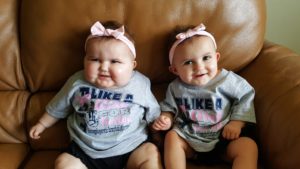 Daelyn died Oct. 25, a week before her first birthday.

Her mother, Dee Dee Comardelle of Luling, called her a little warrior and intended to have the twins celebrate their first birthday, Nov. 1, together.

Instead, the grief-stricken mother had to focus on Demi’s survival at the Children’s Hospital in Cincinnati.

Demi was diagnosed with HLH at six months old when it became active in fevers, an enlarged spleen and liver. She got eight weeks of chemotherapy and high doses of steroids, and then a bone marrow transplant on Oct. 12.

“Having a birthday party for Demi was hard,” Bye said.

Bye said Demi experienced a severe allergic reaction from the last dose of chemotherapy which resulted in a seizure and change in preparation for her transplant.

Due to the change, the chemotherapy may not have been strong enough, which could result in a second transplant.

Dye said Demi’s blood count looks good and she is still feeling well and doing great. However, she is only 44 percent engrafted from the transplant. If she remains at least 20 percent then she will not need another transplant.

Demi’s condition is improving, leaving the family optimistic about the road ahead for the youngster. Bye said Demi is doing well since her bone marrow transplant on March 1.

“Things are looking great,” Bye said. “All her numbers are good. To me, it’s about prayer. She’s doing really, really good, and it helps she has not been sick.”

Dat Dads’ Club of Luling is helping, too.

The family also started the “Pray For Demi” Facebook page to draw spiritual support for the child and her family.

If St. Charles Parish Council members can’t decide by Sept. 24 who should fill the vacant seat left after longtime councilwoman Wendy Benedetto’s departure in August, the governor will fill the vacancy. […]

“COVID doesn’t discriminate,” Jaime Hall said. “This is what it can do to someone’s family.” […]

by St. Charles Herald-Guide - 2 hours ago